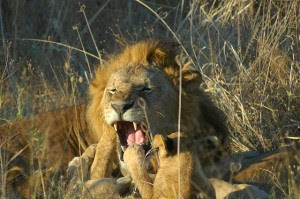 After coexisting for thousands of years, humans and African lions (Panthera leo) are on a collision course. Lion populations have dropped from 450,000 animals 50 years ago to as few as 20,000 today. Most of that decline has taken place over the past two decades, and experts are now predicting that the big cats could actually go extinct in as little as 10 to 20 more years.

Threats to lions come on many fronts—including hunting by American trophy seekers, poaching for use in traditional Asian medicine, disease and pesticide poisoning—but the biggest danger occurs when lions encroach upon livestock. Cattle farms have taken over much of the African savanna and grasslands, thus pushing aside lions' natural prey such as impalas, zebras and buffalo. Rather than following the prey to new territories, many lions simply turn to its nearest replacement—cattle. But when lions kill cattle, it affects peoples' livelihoods, and the lions are the ones that often end up paying the price with their lives as farmers shoot or poison the troublesome beasts.

But now there's an idea that could keep lions from predating on livestock. The Colorado-based nonprofit WildiZe Foundation has funded research to see if lions can be taught to dislike the taste of beef. The process is called conditioned taste aversion, and it has worked with some other endangered species, including Mexican wolves and quolls in Australia.

Denver Zoo research associate Bill Given started his research on lions this September at Grassland Safari Lodge in Botswana. The lodge is home to several lions that have previously slain cattle but were captured by lodge personnel before farmers could kill them. The lions now live semi-wild lives in 11-hectare enclosures at the lodge but depend upon humans for their food. Given and his team of researchers gave eight of the cats meals of beef treated with the deworming agent thiabendazole in doses large enough to make them temporarily sick to their stomachs. "It basically causes a bad case of indigestion," WildiZe founder Eli Weiss told The Aspen Times.

After a few meals of treated beef, the lions were once again offered untreated meat. Seven of the eight refused to eat it, while an eighth actually refused to eat at all for a short period.

Writing for the WildiZe Web site, Given described conditioned taste aversion as "a natural defensive mechanism enabling predators to survive encounters with prey with toxic [antipredator] defenses. When mammalian predators experience nausea after consuming prey with toxic defenses, they form an aversion to the taste and scent of these prey animals. Long after recovering from the effects of a [sublethal] dose of the toxin, predators avoid offending prey wherever they are encountered."

Now that researchers know conditioned taste aversion works in lions, the next step is to obtain approval from Botswana's Department of Wildlife and National Parks and the Kenya Wildlife Service to try the idea in the wild.
Posted by Kishore Kotecha at 11:01 PM