The Times Of India

http://timesofindia.indiatimes.com/city/ahmedabad/Now-Barda-Dungar-has-a-lion-gene-pool/articleshow/45421356.cms
AHMEDABAD: After the success of the gene pool experiment at Rampara Virdi, the forest department has started one more gene pool at Barda Dungar, situated on the boundaries of Porbandar and Jamnagar.

So far, six new cubs have survived in the last couple of years at Rampara Virdi. These cubs belong to a separate gene pool. The gene pool was set up after experts had earlier sounded an alert, saying that inbreeding had weakened the unique wild cat's genetic structure.

Officials said that two pairs of lions from completely different areas were captured and brought to Rampara and now to Barda to ensure that the genes differed. "If the lioness is from Sasan, the lion would be from a far-off area of Tulsishyam and even Bhavnagar," a forest official told TOI.


Officials said the Rampara Virdi was the first in the gene pool experiment series and after successful documentation, the state government decided to have one more gene pool at Barda Dungar. In Barda also, the two pairs have already been shifted and they have come close to each other and are also engaged in mating. Officials are keeping a close watch on the development in Barda.

Officials said that among concerns raised by experts, a study by Stephen J O'Brien, chief of the laboratory of viral carcinogenesis, National Cancer Institute in Maryland, revealed: "A limited sample of Gir lion from Sakkarbaug zoo revealed high levels of spermatozoal abnormalities. These results affirm the hypothesis that genetic diminishment of natural population may have unfavourable physiological effect such as increased spermatozoal abnormalities."

Experts say inbreeding and loss of genetic variation decrease the ability of wild populations to adapt to climatic changes and make them vulnerable to new diseases, parasites and pollutants.

Officials said that the gene pools are a long-term measure to help conserve genetic diversity. This is captive conservation of lions.

According to them, inbreeding has always been a concern. This could lead to deterioration in genes and rise in diseases harming the animals. "The gene pools will help us monitor and create healthy specimens," said a senior official involved in the project.

Posted by Kishore Kotecha at 7:58 PM No comments:

Mumbai: Jimmy, a 16-year-old lioness in Jijamata Udyan, a zoo at Byculla in central Mumbai, died Monday after prolonged illness, an official said.

The African-Asiatic hybrid lioness, which was the only big cat in the zoo, had been removed from public display and shifted to the zoo hospital a couple of years back, after she suffered paralysis and osteoarthritis.

"We had shifted the lioness to the zoo hospital after she was diagnosed with degenerative myelopathy. In this condition, both her hind legs had stopped responding due to paralysis and osteoarthritis," Anil Anjankar, director of Jijamata Zoo told PTI.

Jimmy was born at the same zoo to African lion Amar and Asiatic lioness Anita on March 28, 1998, he added.

According to the official, it will be another year before a new lion is brought to the zoo.

"Lions, tigers and leopards are known to attract many visitors. We have got approval for an Asiatic lion. The layout is also ready, but that will take at least another year to come," he said.

Posted by Kishore Kotecha at 7:54 PM No comments:

No sign of Gir transfer, MP seeks to shift zoo lions to Kuno

No sign of Gir transfer, MP seeks to shift zoo lions to Kuno
Times of India

BHOPAL: A year after Madhya Pradesh won an eight-year legal battle with Gujarat government to translocate a few Gir lions to its Kuno-Palpur wildlife sanctuary, the Shivraj Singh Chouhan government seems to have given up hope of getting the prized predators and is now looking to have zoo lions from the south released into the sanctuary.

The state government has decided to translocate Hyderabad-bred Asiatic lions to the Kuno reserve in Sheopur district, instead of waiting for the Gir lions, whose relocation was opposed by Narendra Modi when he was the chief minister of Gujarat.

Gir is the only place in the world where the Asiatic lion survives in the wild. The idea behind the Kuno-Palpur project was to raise a buffer population of wild lions as an insurance against epidemics or natural disasters wiping out the Gir lions.


In August this year, the Gujarat government's curative petition against the shifting of Gir lions too was dismissed by the Supreme Court.

As CM, Modi had refused to entertain any request from the Chouhan government to shift the lions till the apex court on April 15, 2013, set a six-month deadline to the environment ministry to relocate the predators to Kuno. The court held that the species was under the threat of extinction and needed a second home. But the court's order has not been followed.

Government sources in Hyderabad told TOI that the MP forest department had approached them asking for pure breed Asiatic lions, bred in captivity, for the Kuno reserve.

Asked about the move, state chief wildlife warden Narendra Kumar said, "It would be too early to comment." Other senior forest officers in the state, however, confirmed they have decided to shift lions from Hyderabad zoo to Madhya Pradesh.

But the Kuno project might take time to kick off, following global concern over the recent death of the Asiatic lion pair — Lakshmi and Vishnu — at Etawah's lion safari in Uttar Pradesh. The two zoo-bred lions died within a month of relocation from Hyderabad, said sources. Both suffered 'multiple infections', including viral infection that caused paralysis. The Etawah safari was a pet project of the Samajwadi Party government, which started two months ago. The lions were brought to Kanpur zoo from Hyderabad in April, 2013, and shifted to Etawah safari in September 2014.

In May, the MP government sent its second reminder to the Union ministry of environment and forests (MoEF) to take urgent measures to shift lions from Gujarat to Kuno. More reminders were sent to additional director general (ADG) wildlife, (MoEF), who heads the 12-member committee formed to execute the translocation.

The move to relocate big cats, first mooted in 2000, had been hanging fire because Gujarat steadfastly refused to part with the majestic lions.

The reported move to release zoo-bred lions in the Kuno-Palpur sanctuary neither makes sense from the conservation standpoint nor would it be safe for the translocated animals. It's well documented that animals bred in captivity do not adapt well in the wild. Moreover, the idea behind Kuno-Palpur was to have a second home for Gir lions so that epidemics and natural disasters do not finish off this last surviving wild population of Asiatic lions. The Supreme Court has turned down Gujarat's curative plea against the transfer of Gir lions to the sanctuary. The MP government should be asking for the court's orders to be implemented, instead of thinking up such disastrous schemes. 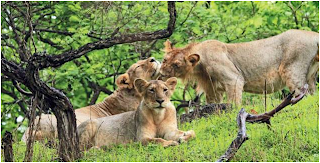 Posted by Kishore Kotecha at 7:47 PM No comments:

Asiatic lion may continue to be in endangered category

01-12-2014
Asiatic lion may continue to be in endangered category
The Times of India
http://timesofindia.indiatimes.com/city/ahmedabad/Asiatic-lion-may-continue-to-be-in-endangered-category/articleshow/45340099.cms

AHMEDABAD: The Asiatic lion, which is listed in endangered category in red list released by the International Union for Conservation of Nature (IUCN), will continue to be critically endangered as the population of breeding male and female has not crossed 500. The last census has 411 population and the next census due next year will have around 500 lions, including the cubs.

It was in 2011 that the report of the IUCN based on 2008 field survey and the 2005 census has stated that the Asiatic lion exists as a single isolated population in Gujarat, numbering approximately 175 mature individuals, all occurring within one sub-population (but in four separate areas, three of which are outside the Gir forest protected area).

Since the population now extends beyond the boundary of the lion sanctuary, and the numbers are stable, the sub-species is listed as endangered based simply on the population size.

Officials said that as per the other criteria the lion population was increasing, they were found in separate areas and hence it qualified to be in the vulnerable category. But just because the population was 411 as per the 2010 census, the lion was listed in endangered category.

Posted by Kishore Kotecha at 4:00 PM No comments: