Calvary Greetings in the name of the LORD Almighty and Our LORD JESUS CHRIST the giver of every good thing. Good day,i know this letter will definitely come to you as a huge surprise, but I implore you to take the time to go through it carefully as the decision you make will go off a long way to determine my future and continued existence. I am Mrs. Marian Michel aging widow of 67 years old suffering from long time illness. I have some funds I inherited from my late husband,

The sum of (US$8.5 Million Dollars) and I needed a very honest and God fearing  who can withdraw this money then use the funds for Charity works. I WISH TO GIVE THIS FUNDS TO YOU FOR CHARITY WORKS. I found your email address from the internet after honest prayers  to the LORD to bring me a helper and i decided to contact you if you may be willing and interested to handle these trust funds in good faith before anything happens to me.

I accept this decision because I do not have any child who will inherit this money after I die. I want your urgent reply to me so that I will give you the deposit receipt which the  COMPANY issued to me as next of kin for immediate transfer of the money to your account in your country, to start the good work of God, I want you to use the 40/percent of the total amount to help yourself in doing the project.

Thanks and God bless you,

Posted by Kishore Kotecha at 4:10 AM No comments:

12/04/2016
Asiatic lioness, stranded on islet, found dead
The Indian Express
http://indianexpress.com/article/india/india-news-india/asiatic-lion-lioness-stranded-dead/
An Asiatic lioness died on Tuesday while trying to return to the mainland after venturing into the sea to reach a tiny island some 2.5 km off Amreli coast, Gujarat. Forest officers were informed on Monday that a lioness was spotted on the tiny island, measuring around one hectare, off the coast of Doliya village in Amreli. Forest guards and rescuers went to the island on boats but could not rescue the stranded lioness. Eventually, her carcass was found on the Doliya coast on Tuesday morning.

"Our staff spotted the lioness on the island but couldn't rescue it on Monday. The animal was too weak and tranquilising her was not an option as we feared that she can run into the sea after being shot with a tranquiliser dart as the area was too small. We gave her food and water and were waiting for her to return to the shore at low tide. But we found her carcass on Tuesday morning," Ganga Sharan Singh, deputy conservator of Bhavnagar told The Indian Express. Forest officers said they were still wondering as to how the lioness, believed to be around four years old, might have reached the islet. "We believe it could have gone there during low tide and was left stranded. We are still not sure if the carcass recovered this morning is that of the lioness which was spotted on the island," the DCF further said. Asiatic lions, which are endangered species, are not known to be great swimmers. Though they have settled in the coastal areas of Rajula and Jafrabad taluka of Amreli and Mahuva of Bhavnagar, there are no known records of them having swam across the sea to reach an island. "A lioness had reached Nagva beach in Diu many years ago. But there were cubs with her and therefore it was concluded that she couldn't have swam to Diu, but might have taken the road that connects Diu to Gujarat. Lions have been spotted on coastline but not on islands," said Bhushan Pandya, a wildlife conservationist who has been studying Gir forest for the last three decades. Gir forest and other protected areas in Junagadh, Gir Somnath, Amreli and Bhavnagar districts are the only natural habitat of endangered Asiatic lions. It is the only place in the world outside Africa where lions are found in the wild. The 2015 lion census had pegged the number of Asiatic lions at 523. Pandya, who is also a member of Gujarat state wildlife board, further said that while lions can swim, the lioness could have died after experiencing hypothermia or due to some injury while trying to swim back to shore. The DCF said that they were waiting for the post-mortem report of the animal 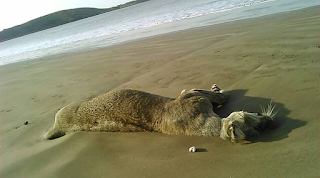 Posted by Kishore Kotecha at 12:44 PM No comments:

12/04/2016
Lion kills woman sleeping in farm inside Gir forest
The Hindu
http://www.thehindu.com/news/national/other-states/lion-kills-woman-sleeping-in-farm-inside-gir-forest/article8462996.ece
A 50-year-old woman was mauled to death by a lioness in the Gir forests, the second such incident within a month in Gujarat.

The woman was asleep in the family's farm when a lioness dragged and killed her outside the farm at Bharad village inside the Gir forest in Amreli district.

"The woman was dragged 400 metres and her mutilated body was found outside the farm. We have caged one of the three cubs to nab the animal," said a forest official from Dhari range.

"The incident happened at midnight when the victim and others working at a mango orchard were sleeping in the farm located in the forest area, where movement of big cats is quite frequent at night," the official added.

"Many farms in the forest are also a source of water for lions and other animals and animals move around a lot for water in summer. So, we have alerted the farm owners to ensure that people should not sleep in the open at night," the forest official said.

Posted by Kishore Kotecha at 12:33 PM No comments:

05/04/2016
Gujarat foresters relieved as MP marks Kuno-Palpur for tigers
The Times of India City
http://timesofindia.indiatimes.com/city/ahmedabad/Gujarat-foresters-relieved-as-MP-marks-Kuno-Palpur-for-tigers/articleshow/51691895.cms
Ahmedabad: The news that Madhya Pradesh government has decided to develop Kuno-Palpur as a tiger reserve has brought relief to officials of the forest department in Gujarat, who had been fighting a long battle in the apex court over the issue of translocation of lions to Kuno-Palpur. There are 523 lions in Gujarat. It was in April 2013 that the Supreme Court had formed a 12-member committee to oversee the translocation of lions to Kuno from Sasan Gir. The issue is pending with the committee. Meanwhile, comes the gladdening news.

Officials from National Tiger Conservation Authority have also informed their counterparts in Madhya Pradesh that they should in fact develop Kuno-Palpur as a tiger reserve, as it was an important sanctuary for the movement of tigers from Ranthambore to Kuno. The movement of tigers from Ranthambore national park in Rajasthan to Kuno-Palpur wildlife sanctuary has already established a functional natural corridor between the two sanctuaries.

At present, one tiger is already residing in Kuno, while another two are in the periphery of Kuno-Palpur and they are moving towards the Kuno sanctuary.

Sources in Madhya Pradesh government said that recently Prakash Javadekar, the Union Minister of State for Environment, Forests and Climate Change, had made a statement that it would take 25 years for translocation of lions from Sasan Gir to Kuno Palpur. This statement led the MP government to rethink priorities and decide to have tigers in Kuno-Palpur, rather than lions.

Reacting to the news, officials in Gujarat forest department said that it was impossible to translocate the lions to Kuno in wake of the new guidelines of the International Union for Conservation of Nature. "There are several studies that need to be undertaken before translocating lions to Kuno. The 12-member committee had in its first meeting in 2013 accepted that the translocation will be based on the new guidelines. MP will have to carry out several studies, and also have an area of 700 sq km against the existing 350 sq km area," said an officer.

Sunny Shah, landscape coordinator, WWF India for Rajasthan and north MP, and a person intimately associated with Kuno landscape said, "Kuno is a pristine habitat for big cats, and being close to Ranthambhore, we can create a meta population for the last semi-arid population of tigers. Kuno has achieved its population goal of preys, and now waiting for predators. There are already 2-3 tigers in and around Kuno, and there's opportunity to double the tigers there. We have plans to build it as a tiger reserve."

Posted by Kishore Kotecha at 12:22 PM No comments:

23/03/2016
Two man-eater lions captured in Gujarat, sent to Sasan Gir
Business Standard
http://www.business-standard.com/article/pti-stories/two-man-eater-lions-captured-in-gujarat-sent-to-sasan-gir-116032301201_1.html
Two lions, who had killed a person near Ambariya village in Amreli district last week, have been captured and sent to a separate enclosure at Sasan Gir, a forest department official said today.

"The two lions were caged on Monday from near the site of the incident," Assistant Conservator of Forest, N M Muni said.

"Both the lions were involved in killing the person. After being caged, they were sent to Sasan where they will be kept at an enclosure meant for man-eaters," he said.

Jinabhai Parmar, a cook working for labourers employed in an agricultural field, was dragged away by the lions when he was sleeping at a camp around 3 km away from the village on Sunday, Muni said.

Parmar's body parts were recovered from a shrub, around 100 metres from the camp, he added.
Posted by Kishore Kotecha at 2:11 PM No comments:

According to sources from the forest department, the cub was four months old and was found dead in Ambaliyala village inside the Tulshishyam forest range in Amreli. Forest officials said that the lion cub had died following infighting between lions.

Another big cat, a two-and-half-year-old sub-adult lion, was found dead near a farm in Rajpara village of Visavadar taluka in Junagadh on Wednesday. Forest department officials said that the animal was suffering from an infection in its hind leg since many days. It seems to have died due to the infection, they added.

Meanwhile, the forest department in Dahri taluka of Amreli was successful in caging two lions that had allegedly killed a 60-year-old man near Ambardi village last week. The lions have been kept under observation. The lions had attacked one Jinabhai Makwana, when he was asleep in an open farm on March 19.

Posted by Kishore Kotecha at 2:05 PM No comments: