Act against illegal hotels around Gir sanctuary:HC to Guj govt

AHMEDABAD: The Gujarat High Court has directed the state government to take action against the illegal establishments operating in the buffer zones of Gir wildlife sanctuary, the sole home of the Asiatic lions.

Admitting a representation made by one Anil Chudasama as a PIL, a division bench of Justices Jayant Patel and S H Vora yesterday directed the state authorities to take necessary legal action by March 5 against 128 such establishments that are being operated illegally in the  2-km buffer zone around the Gir sanctuary.

The High Court acted on a report of the Gujarat government which said that there are 128 such units, including hotels and resorts, that are being illegally run around the sanctuary.

Additional Advocate General P K Jani submitted before the bench that the state will take action against the encroachers in Gir.

The conservator of Gir forest has intimated Gir-Somnath district Collector's office regarding the illegal establishments, Jani said before the High Court.

The state forests and environment department had on February 2 submitted a report before the High Court containing a list of 66 private establishments around the sanctuary, saying that the owners are running these hospitality units in the form of restaurants, hotels and resorts, which is prohibited.

The state government had yesterday filed another report before the HC and said that there are 128 establishments spread over the three districts of Amreli, Junagadh and Gir-Somnath.

The High Court acted on the PIL based on the representation of Chudasama, who alleged that the local authorities had prevented him from carrying out agricultural activity on a plot purchased by him.

He said he later found that the plot was originally allotted to the forest dwellers for their settlement outside the Gir sanctuary, but some of them had sold the land and gone back to the forest.

He said that there was illegal sale of land around the Gir sanctuary, which was prohibited under the law. 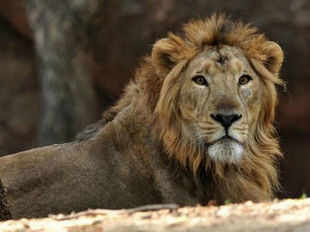 (Gujarat HC directs state authorities to take necessary legal action by March 5 against 128 such establishments that are being operated illegally in the 2-km buffer zone around the Gir sanctuary. )
Posted by Kishore Kotecha at 3:41 PM No comments: