How are you doing today? hope you are reading this message in good health, my name is Maire Roache, i am a single girl without kids, please reply to this email and i will tell you more about myself.

have a nice day,
Posted by Kishore Kotecha at 6:47 PM No comments:

Lioness run over near Gir sanctuary

23/03/2016
Lioness run over near Gir sanctuary
The Hindu
http://www.thehindu.com/news/national/lioness-run-over-near-gir-sanctuary/article8386287.ece
A lioness was run over by a speeding vehicle on Pipavav road, near Gir sanctuary, on Tuesday. The forest department has sent the body for post-mortem.

"It appears that the lioness was trying to cross the road," a forest official told The Hindu.

Last year, two lions were killed on the railway tracks near Rajula.

"Rajula highway sees high traffic movement because of the Pipavav port and sometimes heavy vehicles run over animals on the road," the official said.

"There are more than 174 lions in Amreli district outside the Gir national park," he said.

The State government had, in reply to a question in the Assembly recently, revealed that 310 lions including cubs had died in the Gir forest in the last five years.

According to the State's Forest and Environment Minister Mangubhai Patel, 25 of them died an unnatural death.

Posted by Kishore Kotecha at 12:14 PM No comments:

19/03/2016
Two tonnes of plastic removed from around Gir
The Times of India
http://timesofindia.indiatimes.com/city/ahmedabad/Two-tonnes-of-plastic-removed-from-around-Gir/articleshow/51466256.cms
Ahmedabad: Around 20 tractorloads of plastic waste, some two tonnes, was recovered from the periphery of Sasan Gir as part of a move to free the last abode of the Asiatic lion from plastic.

The forest department, as part of celebrations of the 50th year of the sanctuary, has taken up a drive to make the sanctuary and its periphery free of plastic. The sanctuary turned 50 on September 18 last year.

A P Singh, chief conservator of forests says that apart from removing plastic from the periphery, the forest department is going to propose a complete ban on the use of plastic in Sasan and nearby areas. "We will first clean the area and then will talk to traders and persuade them to end the use of plastic. In the last stage, we will persuade tourists not to leave plastic anywhere in the area."

On Friday, the wildlife division of Sasan Gir had organized a camp for 250 people, including NGO workers, college students local villagers, guides, drivers and forest staff.
Ram Ratan Nala DCF of wildlife division Sasan Gir said participants were divided in 13 teams to collect plastic waste. Within three hours, some 2,000 kg of plastic waste was collected from around the village."

"It was the responsibility of the guide and the driver to ensure that tourists did not litter inside the sanctuary. Further, drivers and guides were instructed to collect any plastic bags they saw on their route," said a senior officer. 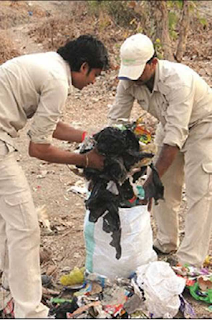 Posted by Kishore Kotecha at 12:06 PM No comments:

Gir to have 350 more watering holes

16/03/2016
Gir to have 350 more watering holes
The Times of India City
http://timesofindia.indiatimes.com/city/ahmedabad/Gir-to-have-350-more-watering-holes/articleshow/51422029.cms
Ahedabad: The forest department is making elaborate arrangements to ensure that the Asiatic lion and other wildlife do not remain thirsty during summer.

The department is taking adequate steps to ensure availability of water not only within the Gir sanctuary but even ouside the reserve where lions are found.

The department proposes to add 350 watering holes in the area, which includes artificial ponds created in the fields of farmers. After this, the Gir landscape, which is spread over 22,000 sq km, will have no less than 800 artificial watering holes where lions can quench their thirst during summer.

According to officials, most of the artificial ponds are in Gir Sanctuary while fewer than 50 are in the area outside the control of the forest department which is now planning to construct new ponds and fill up the empty ones in the fields that have parapets around their mouths.
Officials said the department has decided that new ponds will be constructed only if there is a windmill or a solar power system so that water is filled automatically. He said that where there is no source of natural water, tankers will be used to fill the watering holes.

AP Singh, chief conservator of forests, Junagadh, said that they will ensure that there is enough water for lions and wildlife during summer.

"We will also have water ponds outside the forest area which lions have made their permanent home," said Singh.
The forest department has around 500 man-made water bodies which are now filled regularly at the onset of summer.
Water tankers, wind mills, the solar power system and human power are used to fill the water bodides twice every day.
Such water bodies are created especially at places where natural water sources are not available.
According to DCF, Dr Ram Ratan Lala, these arrangements have been made due to poor monsoon last year.
Posted by Kishore Kotecha at 1:09 PM No comments:

07/03/2016
Grittily Guarding the Gir's Big Cats
Inian Express
http://www.newindianexpress.com/education/edex/Grittily-Guarding-the-Girs-Big-Cats/2016/03/07/article3308801.ece
When a forest that is home to 523 lions did not stop Darshana Kagda think twice from saying yes to a job as a Forester, you've got to wonder what else will! Being headstrong paid off too, as Darshana joined the women's forest guard team at the Gir Lion Sanctuary.

Happily married for over a year now, Darshana is so hands-on that she didn't take a break even on her wedding day. A real surprise, considering it meant reporting to the forest at 5.30 in the morning and getting less than 12 days off a year! Apparently, she  loves the lions and the forest way too much to think about anything else. Even her family!

Like her female colleagues, Darshana's dream job began with her convincing her parents to allow her to pursue this unconventional profession. "Initially, they were not very happy with me spending hours in the forest, but when they saw me saving lives and earning my own money, they came around," she says. Darshana who has seven siblings is the sole bread-earner of the house.

But, more than the money, it is the job satisfaction she gets that Darshana cherishes the most. "I love my job, I love the forest and I love the animals. What more should I ask for?" she asks with a smile. "Moreover, I have so many adventurous stories that will last me a lifetime," she says while sharing an encounter with a lion.

"It happened when I was returning from my night rounds. A lion was sitting less than a feet from me. I was alone and I froze. But after a few minutes of staring at each other, the lion walked away. Maybe it knew that I was a friend," she says, with a laugh.

Being someone who never rode a bike, Darshana today is completely dependent on her motorcycle for her patrolling rounds. "It took me more than 10 falls before I finally managed to get a hold of it," she says.

Having been a part of many rescue operations, Darshana recalls an incident that has been her longest operation so far. A villager was killed by a lioness and while the rest of the village labelled the lioness as a 'man-eater', Darshana and her team decided to investigate the matter at the grassroots. After a 15-day long probe, it was clear that the lioness' attack was actually an act of defense. And thanks to their analysis, the two cubs of the lioness did not lose their mother.

"We think beyond out duty, we think as mothers, as sisters who are always ready to help anyone we love. That's what makes us different," she adds. 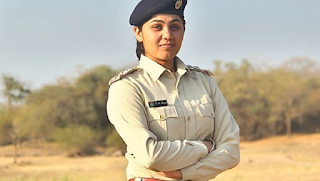 Posted by Kishore Kotecha at 12:25 PM No comments:

05/03/2016
Gujarat reports 310 lion deaths in five years
The Times of India Home
http://timesofindia.indiatimes.com/home/environment/flora-fauna/Gujarat-reports-310-lion-deaths-in-five-years/articleshow/51270204.cms
AHMEDABAD: The Gujarat government has told the state assembly that some 310 Asiatic lions, including 136 cubs, died in five years starting April 1, 2010. On an average, this comes to five Asiatic lion deaths per month.

According to the state government, in the last two years, of the 165 deaths, around 79 were cubs. A population count done in 2015 pegged the number of lions in Gir and its periphery at 523.
Forest department officials said that in the last five years, cub deaths made up 43% of all mortalities. They added that the survival rate of Asiatic lion cubs in Gujarat is around 56%, and this is higher than in their African counterparts. "Earlier, two cubs were born to lionesses on average, this has increased to between three and four cubs, and hence cub deaths are greater," said a senior forest officer.

"Unless the population shows a decline, individual deaths are not a cause for worry. I have no reason to disbelieve that the population grew from 411 to 523 in five years. Despite the deaths of 310 lions, there is an increase of around 113 animals, which is a sign of healthy conservation. I don't think the figure is alarming," said Divyabhanusinh Chavda, member of the Cat Specialist Group, Species Survival Commission, IUCN and former member of the National Board for Wildlife.
Lion expert Ravi Chellam said, "It is normal for 50% of cubs to die in the first 12 months of their birth. Hence it is important to know how many cubs were born in this period to ascertain if there was some reason to worry."

"The average litter size in lions is 2.4 cubs per female and there are around 200 females. If 50 deliver cubs, around 120 cubs are born. Of these, if 40-45 cubs die every year, it is not a cause of worry. Also a deaths rate of 20% among big cats is normal. I don't see any cause of concern as long as the numbers are increasing," said H S Singh, member of the National Board for Wildlife and a lion expert.
Posted by Kishore Kotecha at 12:15 PM No comments: