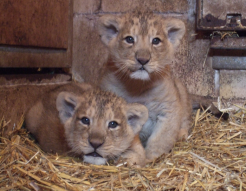 Keepers named the male lion Jayendra, or 'Jay' for short, and the female Kalyana, or 'Kaly' (pronounced 'Kally'). Both names are of Indian origin as these cubs are Asiatic lions. Jayendra means lord of victory, and Kalyana means beautiful.

Despite still being relatively young, the cubs have grown quickly. They are now the size of very large dogs - half their adult size - with paws the size of saucers, and Jay has grown a small mane of hair that will get thicker as he matures.

The youngsters weigh around 75kgs (nearly 12 stone), whereas their father, Kamal, weighs a By Bob Pitchford massive 174kgs By Bob Pitchford(over 27 stone). Despite their size, the cubs won't be fully grown until the age of four. 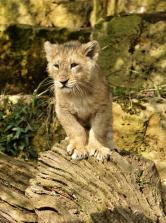 Assistant Curator of Mammals, Lynsey Bugg, explains: "Jay and Kaly are doing very well and developing into beautiful young adults, which is great to see.

"They might be big but they are still very cub-like and playful. Jay in particular is very boisterous; he likes nothing better than pestering his Dad and jumping on him. Kaly is much Kamal with Jay by Bob Pitchford more shy and timid, rather like her Kamal with Jay by Bob Pitchfordmum, but both cubs are inquisitive and will come up to the glass to peer at visitors or keepers." 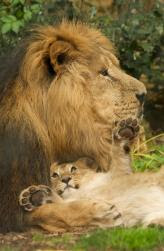 Bristol Zoo's staff vet, Rowena Killick, added: "We have been checking the cubs regularly since they were very little, monitoring their body condition in particular, to ensure they have been eating well since they were weaned. We are very pleased with their progress and Shiva is a great mum, letting the cubs eat first and keeping a close eye on them."

The cubs will be re-homed in other zoos when they are around 18 months old, and will eventually start families of their own as part of the vital breeding programme for this species. The lions will be on long term loan from Bristol Zoo following the recommendations of the European species coordinator for Asiatic lions. It is hoped that Shiva and Kamal will go on to produce more cubs in future.

Jay with his growing mane (by Bob Pitchford) The arrival of Jay and Kaly was the first time Bristol Zoo has had lion cubs in nearly 10 years. They were born in a quiet cuJay with his growing mane (by Bob Pitchford) bbing den and the birth was captured by Bristol Zoo on video – an extremely rare occurrence. To watch a video of the cubs' birth click here: http://www.youtube.com/watch?v=ZLPgKsfyIiM.

You can also watch a video of the cubs at six months old, by clicking here: www.youtube.com/watch?v=jMjzQXCiymM

Asiatic lions are critically endangered and there are only around 400 left in the wild. Bristol Zoo is part of an internationally co-ordinated conservation breeding programme for this species. 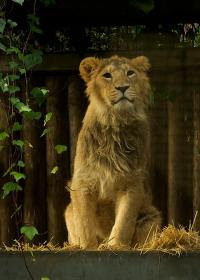 To find out more about how to adopt Kamal the adult male lion at Bristol Zoo, visit the Zoo website at www.bristolzoo.org.uk/animal-adoptions.

Posted by Kishore Kotecha at 4:16 PM