18/01/2016
Lion translocation: Govt prepares affidavit for SC
The Times of India
http://timesofindia.indiatimes.com/city/ahmedabad/Lion-translocation-Govt-prepares-affidavit-for-SC/articleshow/50621123.cms
Ahmedabad: Gujarat government is preparing to file an affidavit in the Supreme Court regarding translocation of Asiatic lions from Gir Sanctuary to Kuno Palpur in Madhya Pradesh. A committee has also been formed to discuss the matter before the af fidavit is filed.

The affidavit has become necessary because of a petition filed by the Wildlife Conservation Trust, a Rajkot-based NGO. The NGO has claimed that to shift the lions without considering their pride behaviour may be counter productive and threaten their survival.

The petitioner also claims that KunoPalpur Sanctuary in Madhya Pradesh is part of the migration corridor for tigers from Rajasthan's Ranthambore National Park moving to Madhav National Park in Madhya Pradesh.
However, though the petition is yet to be heard, the court has asked the National Tiger Conservation Authority (NTCA) and all concerned governments, including Gujarat and Rajasthan, to file an affidavit in connection with the petition.

Sources in the department said that the proposal to file the affidavit was brought up for discussion before the State Board for Wildlife.

The petition filed by Wildlife Conservation Trust has even made Rajasthan govern ment and the NTCA a party.

The officials said that the effect of the petition was that even the 12member committee, formed as per the April 2013 direction of the Supre me Court which ordered translocation of Girlions to Kuno Pal pur, has decided to ma ke the NTCA and Rajasthan government a party and seek their opinion before actually moving the lions to Kuno Palpur.

The officials said that the 12-member committee wants to know the preparedness of Rajasthan if the lions use the same corridor and move to Ranthambore.

Posted by Kishore Kotecha at 2:36 PM No comments:

04/01/2016
Dramatic moment a LION is rescued from the sea after straying from a wildlife park into a port in India
Mail Online News
http://www.dailymail.co.uk/news/article-3383509/Dramatic-moment-LION-rescued-sea-straying-wildlife-park-port-India.html
  Footage shows rare Asiatic lion jumping into sea waters in Jafrabad Port

  It was rescued by forest officials and sedated

This is the breathtaking moment a lion was rescued from the sea off the Indian coast after fishermen spotted the wild animal sitting on the edge of a rock.

Bizarre footage showed the big cat prowling by the edge of the water off a beach in Jafrabad Port in Gurajat.

The lion looks out in the Arabian Sea, then turns back before jumping into the water with a splash and floating away from shore. 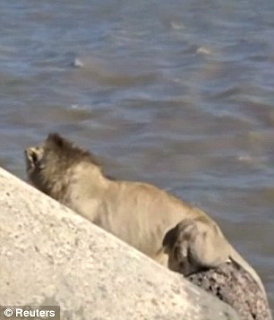 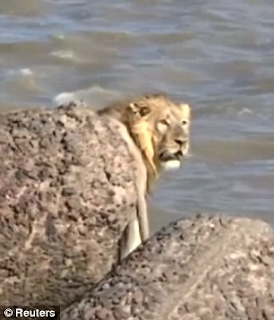 The cat sits on the edge of a rock in Jafrabad Port in India's Gurajat. It looks out into the Arabian Sea, then turns back before jumping into the water with a splash 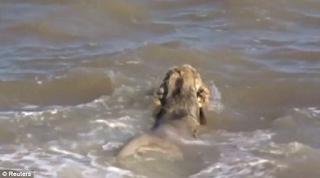 Locals gathered around the shore to get a glimpse of the rare sight of a lion swimming in sea waters.

It is believed the lion strayed into the port from the nearby Gir National Park. Forest officials were immediately informed and a rescue team was sent to lift the lion from the water.

The big cat was sedated and transported to the animal care centre.

An investigation is underway to find out how it arrived at the port, Reuters reported.

The Gir National Park is the last safe heaven for the Asiatic lion population, which has been decimated by hunting and drought.

Only one dozen Asiatic lions were still alive in the early 20th century.

However, a ban on lion hunting and preservation initiatives had seen the Asiatic population in Gir rise to 411 in 2010 and 523 in 2015, according to official figures quoted in May by Gujarat Chief Minister Anandiben Patel. 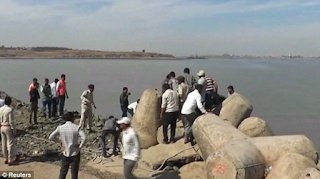 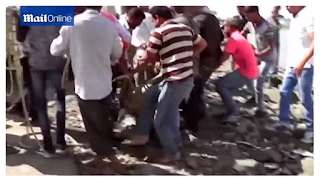 Forest officials and volunteers carry the wild animal to the shore 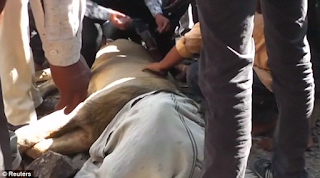 The latest census conducted earlier this year by 2,500 officials and volunteers found 109 adult males, 201 adult females and 213 cubs over 21,000 sq km area of Gujarat's Saurashtra region - which includes Junagadh and 10 other districts.

The wild animals were photographed and tagged by GPS during the census.

'Enumerators recorded unique identification marks like scars on the face, the shape of ears, tuft of hair on tail, colour, and belly folds. Using all this information with location details we removed overlapping and reached the final count,' Forest official CN Pandey told the BBC.

The sheer increase in lion numbers has posed new challenges to their safety. Some 40% of the lions now live outside the forest area and 260 lions have died in the past five years.

Environmentalists claim the Saurashtra region has become a 'death field for the Asiatic lion'.

Man-animal conflict has also increased. Lions have killed 14 people and wounded 114 others in the past two years.

Posted by Kishore Kotecha at 4:30 PM No comments:

02/01/2016
Celebrating the golden Sasan Gir
The Hans India
http://www.thehansindia.com/posts/index/2016-01-02/Celebrating-the-golden-Sasan-Gir-197438
September 2015, Gir Forest National Park & Wildlife Sanctuary celebrated its 50th anniversary. The sanctuary is habitat for many rare species making it one of India's richest regions
The Gir Forest National Park & Wildlife Sanctuary is also known as Sasan-Gir, is a forest and wildlife sanctuary in Gujarat. It is a natural habitat for the rare species of Asiatic Lions. The sanctuary was established in 1965 and is spread over 1,412 sq km, of which about 258 sq km is fully protected the national park and other 1,154 sq km is for the sanctuary.

However, the total area of Gir is 2,200 sq km. Gir forest previously a well-known hunting ground of the Nawabs of Junagadh was declared as a "protected" area in 1900. It celebrated its Golden Jubilee in September 2015.

The park is located 43 km north-east of Somnath, 65 km south-east of Junagadh and 60 km south-west of Amreli and is the sole home of the majestic Asiatic lions (Panthera leo persica). It is also the location to find thousands of other uncommon creatures. The carnivores in the area comprise of Asiatic lions, Indian leopards,

About the Golden Jubilee celebrations, Dr Sandeep Kumar, Divisional Conservation Forest, Officer of Gir, said that a two-day seminar was organised in Rajkot where a special postal stamp was launched to create awareness regarding conservation of animals.

Reporting some good news he said, "Thanks to the dedicated work by forest officers, women guards, van raksha sahayaks, veterinary care and food facilities provided, according to the 14th Asiatic Lion Census conducted in the month of May, the number of lions has increased to 523 from 174 at the sanctuary's inception."

He further adds that they are hopeful of crossing the figure of 1,000 by 2030. There are more than 30,000 resident animals that exist in the natural habitat, which is dominated with over 25,000 deer families.

The Gir boasts of more than 507 plant species, which includes grass and large and tall trees grown in deciduous forests that have been recorded in a recent survey. The count of distinct fauna species on the other hand has reached 2,375 and includes about 38 species of mammals, around 300 species of birds, 37 species of reptiles and more than 2,000 species of insects.

The Gujarat State Forest Department, which adopted the Indian Crocodile Conservation Project in 1977, reported that close to 1,000 marsh crocodiles reared in the Kamaleshwar Lake and other reservoirs as well as small water bodies in and around Gir.

A fascinating fact about the species of lion protected in Gir is that it is said to have been derived from just a dozen that survived in the 1880s. After the establishment of the sanctuary, the population was roughly at 70 to 200 by 1930.

However, despite the Gir forest being well protected, there are instances of Asiatic lions being poached and poisoned for attacking livestock. Some of the other threats to the species include floods, fires and the possibility of natural calamities. Most people feel lions look aggressive and are dangerous. However, the lions of Gir rarely attack people and are able to live in close proximity to people.

Celebrating the 50 years of its existence, one cannot ignore the hands that have been put together to sustain the place. The 'Trio Lion Queens' of Gir deserve a mention – they are three women from Saurashtra. Rasilaben Wadher, Kiran Pithiya and Darshanaben Kagada, who work as foresters at Devaliya Safari Park in Sasan Gir.

The women overcame opposition from their traditional Muslim families to work as foresters.  Gir National Park and Sanctuary has been a tourist attraction for long, though it does not have a designated area for tourists to track and view their natural habitat. However, to accommodate tourist attraction, an Interpretation Zone has been created at Devalia Safari Park within the sanctuary.

Posted by Kishore Kotecha at 4:10 PM No comments: