Forest Department Is Rescuing An Animal A Day From Human Habitations

On Thursday, a team of forest officials got a tip-off about a lion trapped in a farm in Bhesan Taluka. The team quickly sounded an alarm and within 10 minutes, the entire team boarded a jeep and rushed to the spot.

This is not a rarity. The state forest department is now rescuing one animal daily on an average. Also on Friday, in Bhesan Taluka, a lion got trapped when a farmer laid a trap to prevent wild animals from entering his farm.

Deputy conservator of forests, Sandeep Kumar said, "In the last decade, the number of rescue operations has registered a seven-fold increase. As against 47 animals rescued in 2000-01, the number has gone up to over 322 a year in 2010-11. This includes even smaller animals like chital, nilgai and snakes among others."

The Gir reserve forest has a carrying capacity of 290 odd lions. However, the May 2010 census showed that there were 411 lions in and around the forest. Of these, 72 lions were outside in the revenue area spread along the Saurashtra coast and in Mahuva and Palitana.

Apart from the increasing population, experts feel that the big cats are able to live outside the forest because of plentiful livestock. Moreover, they prefer cattle though there are wild prey animals like nilgai and boar.

"The population of lions is increasing and they are also moving out of the jungle to establish new territories. Since the department now has more employees, more animals are being rescued," said Ravi Chellam, an expert on lions. "Also the habitat outside the Gir forest is changing. Often animals get into trouble by falling in wells or enter fields or houses."

Lions are prolific animals and, as long as Gir is wellprotected, they will always be found in the surrounding landscape, said a senior officer. Except for Girnar, the other areas having high number of trees are small, enough to accommodate one or two prey. It is an stablished fact that the cats take shelter in the woods during the day and hunt livestock in the surrounding villages at night.

Additional principal chief conservator of forests H S Singh said in the early 1990s there were only 12 lions outside the forest. But the population of lions, which is increasing by nearly 10-15%, is growing more outside the forest areas. He said Gir forest has one of the best rescue operations in the country. "The rescue operations in other parts of the country are not even 20% of what they are in Gir forest. This speaks of high standards of management." Chief conservator of forests R L Meena said, "The increase in the number of rescue operations has several reasons. Firstly, animals are moving out in the open and secondly, the forest department has also begun to concentrate on rescue of smaller animals. The treatment of maggots among lions was also taken up by the department. As soon as we get the information, we rescue the animal for treatment." 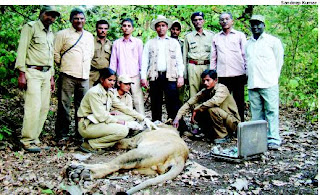 Posted by Kishore Kotecha at 9:33 AM