NEW DELHI: The country's top medical and virology investigators asked the government on Tuesday to shift healthy lions from Gujarat's Gir forest after fresh samples of lions tested positive for a virus, which had wiped out 30 per cent of the animal's population in East Africa, indicating "active disease transmission".

Since September 12, as many as 23 lions have died in the sanctuary, at least 11 of them due to the CDV and Protozoa infections, according to forest officials.

"Specimens were again tested for the canine distemper virus (CDV) by using molecular methods i.e. RT-PCR. One or more samples from 21 out of 27 Gir lions have tested positive for CDV. This indicates active disease transmission among the Gir lions," the Indian Council of Medical Research and the National Institute of Virology said in a statement.

The ICMR, New Delhi, is the top body in India for the formulation, coordination and promotion of biomedical research. ICMR-NIV had received a total of 80 samples of nasal, ocular and rectal swabs from 27 Gir lions which were sick and under treatment and observation at Sakkarbaug zoo in Junagadh.

The samples were referred to ICMR-NIV, Pune by the director of Sakkarbaug zoo on October 6.

"Since the CDV is transmitted by airborne route as well as infected body secretions, healthy lions from Gir forest may be shifted to an alternate suitable location," it said.

It said the lions should be immediately vaccinated with the available vaccine for the CDV.

"At present, most of the available vaccines are made up of the CDV American genotypes 1 and 2 and these vaccines have been used in a number of countries and have been found to be effective," it said.

The CDV causes a highly contagious and life-threatening disease in dogs and also affects wild carnivores such as wolves and foxes.

The prevalence of this virus and its diversity in wildlife of India is not studied and only a few reports are available regarding the detection of the CDV in captive wild carnivores which included tigers and red panda. 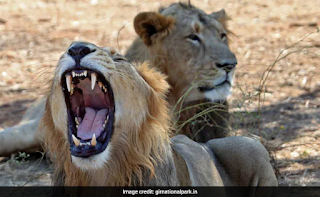 Posted by Kishore Kotecha at 11:29 AM