Hurt pride: How a disease and administrative apathy have imperilled Gir’s lions

Hurt pride: How a disease and administrative apathy have imperilled Gir's lions

On an ordinary day, the Jamvala rescue centre, in the heart of Gujarat's Gir National Park, surrounded by teak trees and herds of spotted deer, receives only the odd injured wild animal. But today there is a frenzy of activity — officials from the forest department and vets from the Delhi Zoo and from the Indian Veterinary Research Institute in Bareilly have converged here to observe and test four wild lions for a deadly disease that is ravaging the park's prides.

Visitors are strictly barred, so I can only catch a fleeting glimpse of the felines from a distance, through a mesh. They look lethargic. "I just took a blood sample from one cat for a test," a forest official tells me. "It appeared very sick, out of energy." I am told they are not eating very much either. Among these are the last three surviving lions of a pride from the Dalkhania range: between September 12 and October 1, 23 lions from this pride died, at least five of them from the canine distemper virus (CDV) and babesiosis, a parasitic disease transmitted by ticks.

The fourth lion at Jamvala has been brought in from a range close to Dalkhania for observation; and another 33, from surrounding ranges, are being similarly observed at the Jasadhar rescue centre a few kilometres away.

The anxiety is palpable. This is the biggest death toll among Gir lions from disease in recorded history. But conservationists are concerned for another reason. This outbreak could have a more far-reaching consequence: Gir's estimated 600 lions are the world's last remaining population of Asiatic lions; so a threat to this sole wild population means a threat to the survival of an entire species.

But under equal scrutiny of the scientific community has been the Gujarat government's handling of the crisis. When the first 10 lions died in the middle of September, the government attributed it to territorial fights. But by October 1, when the death toll more than doubled and made national and international headlines, the State government — which often prides itself for bringing back the Asiatic lion from the brink of extinction — found itself scrambling for causes and solutions.

To begin with, 36 lions were rounded up from the vicinity of Dalkhania and taken to the two rescue centres. Swab samples from the cats were sent to the veterinary college in Junagadh, the National Institute of Virology in Pune, and the Indian Veterinary Research Institute in Bareilly. Experts were approached at London's Royal Veterinary College, and 300 vaccine vials were bought from the U.S.

"We were first told the lions were dying from infighting and other causes. Territorial fights typically kill cubs and adult males, not adult females in one area. Attempts were made to suppress and deny the real cause of death and to distract attention. And now that they have acknowledged the crisis, they are not handling it very scientifically," says Ravi Chellam, a wildlife biologist who has been involved with Asiatic lions since 1985.

For one, taking dozens of wild animals into captivity, forcing them into really close contact when they are potentially infected with the very contagious, airborne virus is "going to do nothing less than aid the spread of the disease," points out Chellam. Then, there have been reports that some of the rescue centres are overcrowded: Jasadhar, where 33 lions are being kept, has the capacity to handle only around five cats at any given time.

The outbreak also exposed the ill-preparedness of the Gujarat authorities in dealing with a crisis of this magnitude. "Nowhere in Gir do we have the facility to treat a dozen cats simultaneously. We have no trained personnel or even the necessary medicines or vaccines," says a beat guard who doesn't want to be named.

For several years now, not a single forest officer from Gir has been sent to the Wildlife Institute of India in Dehradun, for the nine-month course in wildlife management.

"As a forest officer, one should easily be able to identify symptoms of disease during patrolling. I would be able to detect a disease in an animal just from the way it is coughing," says a senior forest official Anil Johri. However, in the case of the Gir tragedy, forest officials and guards were unable to spot the outbreak until the decomposed carcasses of seven lions were found in Dalkhania.

CDV, a highly contagious and airborne disease, is characterised by high fever, coughing and an inflammation of the eyes and nose. The virus has in the past infected several wild animals across the world: coyotes, foxes and pandas. And, most significantly, in 1994, it wiped out a third of the lions in Tanzania's Serengeti National Park. A study has shown that a 'co-infection' such as babesiosis played a role in this mass mortality. The study of the Serengeti deaths, published in the scientific journal Plos One in 2008, finds that CDV mass deaths can be triggered by climate extremes, such as droughts, and widespread herbivore die-offs.

Dogs are considered a primary reservoir host for CDV and they could have transmitted the disease either directly or via an intermediate carrier, such as jackals or hyenas, for instance, says Abi T. Vanak, an animal ecologist with Ashoka Trust for Research in Ecology and the Environment, who has studied the transmission of CDV from feral dogs to foxes around Maharashtra's Great Indian Bustard Sanctuary.

"It could have spread through a shared carcass. Then, a secondary tick-borne disease could have eventually proven deadly. But there does not appear to be any systematic monitoring of this in Gir." With a population of just 600, "what we really need is constant scientific surveillance, and over a long period of time. But we don't seem to have the capacity for systematicwildlife disease monitoring," says Vanak.

The last major tragedy to strike Gir lions was in 2007 when eight cats were killed by poachers in two separate incidents.

There is no doubt much to celebrate about Gujarat's lion conservation success story. The Asiatic lion once roamed a huge geographical swathe, from present-day Iraq to eastern India. By the early 20th century, hunting pushed them to near extinction, and the few that remained were restricted to Gir. This area happened to be protected by the Nawab of Junagadh, who controlled hunting and the population revived. Their numbers jumped again from 411 in 2010 to 523 in 2015. Now, the big cats are found across 8,000 square miles, in eight districts of Gujarat, both within and outside protected areas — in cities such as Rajula or Kodinar and in the farmlands of Amreli district.

But Gir's lions face formidable new threats today. Being clustered in one region makes them vulnerable to extinction in the case of a disease outbreak. For this very reason, the Supreme Court in 2013 had ordered that some lions be shifted to Madhya Pradesh as an alternative home. The judgment said this was not about the Asiatic lion being 'the pride of a State' but about the preservation of an endangered species. Five years later, there has still been no compliance.

Pride apart, there is gross apathy, which has ushered in unregulated tourism and mining in the habitat. In 2016, the Gujarat government recommended the reduction of the eco-sensitive zone (ESZ) in Gir from 10 km around the protected areas to just 500 metres. Following a public interest litigation, the High Court thankfully stayed the proposal.

Shown to the lions

Officials say the government is under intense pressure from the tourism lobby. "Two dozen hotels and resorts have sprung up near Gir national park, while some farmhouses have also come up recently," says a local forest guard.

There is a huge influx of tourists and, to feed their hunger to see a carnivore, there are now patently illegal, paid 'lion shows' — organised in and around the protected area. A few months ago, a video surfaced of a lioness being baited with a chicken as a group of tourists looks on. In another video, irritated lions are seen walking away, abandoning their kill as raucous tourists shout and whistle. After the clips went viral, seven persons including four tourists were arrested. Locals have been known to organise illegal 'lion safaris' around the park.

To add to Gir's woes, in March this year the National Board for Wildlife permitted limestone mining in 417.35 hectares just 6.25 km from the park.

"What you are seeing now was only expected. The authorities invited this upon the lions," says a forest officer who I meet at the Jamvala rescue centre. The State government showed its "utter disregard for lions in particular and wildlife in general," he says, when in May this year it abruptly transferred Deputy Conservator of Forest, Sasan Gir Ram Ratan Nala, who had refused to permit the desilting of the Singhoda dam inside the national park as part of an initiative launched by Chief Minister Vijay Rupani to deepen water bodies before the monsoon. Nala had also refused to permit a religious function at a temple in the forest that the Chief Minister was to visit.

Ironically, after the deaths, Nala has now been brought back to asssist the Chief Wildlife Warden and Principal Chief Conservator of Forests.

As this goes to press, 23 lions have died and another 21 have been found to be infected. The government has, however, denied that more animals have been infected. The Chief Minister has said the situation in Gir "is under control", that "the lions are completely safe in the forest" , and that "they will not be relocated." Meanwhile, the Indian Council of Medical Research has recommended that the "healthy lions from Gir Forest be shifted to an alternate suitable location."

Chellam, however, says, "Much as I am in favour of part of the lion population being translocated, this is not the best time. We have a crisis on hand. What we need to focus on is investigating the source of the outbreak, because without that we will not be able to contain it."

Irrespective of the source, the forest department should ring-vaccinate all domestic dogs in and around Gir to provide a buffer of immune animals and reduce the possible sources of CDV, he says. "Vaccinating 600 wild lions is not feasible, and it makes little sense to vaccinate those that have already been exposed to CDV."

The government, says Chellam, must get the scientific community together and give them access and freedom to do their work. "And yes, we must eventually look to implementing the Supreme Court judgment about translocating the Asiatic lions to establish an additional free-ranging population — we cannot afford to put all our eggs in one basket any more." 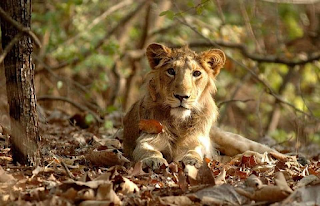 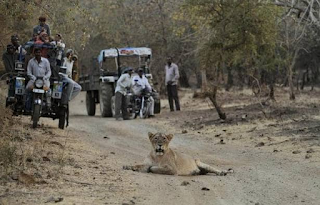 Posted by Kishore Kotecha at 5:15 PM