The Gujarat government's move to shift lions to Barda Dungar Sanctuary may not be enough. Even the ICMR-NIV in a release had stated that healthy lions need to be moved out of Gujarat. The ICMR-NIV advisory came after it found that one or more samples of 21 of the 27 lions had tested positive for canine distemper. All the 80 samples of ocular, nasal and rectal swabs collected from 27 lions that were ill and under observation, were sent to ICMR -NIV.

Apparently, it is what lion translocation experts had been warning the government about for long. "Expediting the process to create the Barda Dungar Sanctuary is welcome. But that will not end the problem. This is because dogs are everywhere, and they are the carrier of canine distemper virus. Once the lions are infected, it is an imperative to keep the affected population far away," said an expert, a renowned wildlife biologist, who had been part of the group that studied the translocation of Gir lions.

He said it is an imperative that the lions be moved to Kuno Palpur. "All the concerns that were raised against translocation had been addressed. Though this time the virus was limited to one range only, there is no guarantee it would be so the next time also. This is why even the SC had ordered translocation of lions to prevent the species from disappearing in case of a disease outbreak. Moving them to Barda will not be enough," said the expert.

He said even Gujarat forest department officials agree that lions need to be moved out but few have the guts to tell the state and centre that.

DT Vasavada, Chief Conservator of Forest, Wildlife Circle, Junagadh, said that he had read about the media reports about the ICMR-NIV statements. "But as far as translocation is concerned, Gujarat has not taken any decision. The matter is still pending in the Supreme Court," he said.

On the ICMR-NIV reports, he said he had so far not got the reports and hence cannot comment on it.

Expediting the process to create the Barda Dungar Sanctuary is welcome. But that will not end the problem. This is because dogs are everywhere, and they are the carrier of canine distemper virus. Once infected, it is an imperative to keep the affected population away. 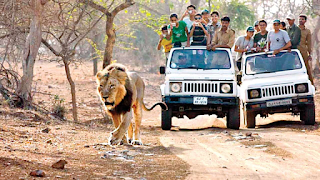 Posted by Kishore Kotecha at 4:29 PM