There is an active canine distemper virus (CDV) transmission among Gir lions as reports of 21 out of 27 lions tested for the disease returned positive, the Indian Council of Medical Research (ICMR) has said.

The disease is a highly contagious and life-threatening viral infection that killed 23 lions in Gujarat's Gir lion sanctuary since September 20. It is known to have wiped out 30% of the total lion population in the Serengeti forest areas in East Africa in 1994.

The research body, which earlier tested samples from dead lions and found five suffering from the CDV infection, has picked up samples from lions that are alive. "We picked up 80 samples from the lions, who had shown symptoms of lethargy that didn't seem normal. Of the 27 lion samples, 21 tested positive for the disease," said Dr Balram Bhargava, director, ICMR.

"Since there is a hint of active disease transmission, we have directed that the lions be given vaccine shots and kept in different geographical locations."

The virus is known mainly to cause a severe infection in dogs that could turn fatal. It may, however, also affect different wild carnivores such as wolves, foxes, raccoons, red pandas, ferrets, hyenas, tigers and lions.

The ICMR issued a fresh statement on Tuesday confirming a spurt in illness in the lions.

"…ICMR-National Institute of Virology (NIV), Pune received a total of 80 samples of nasal, ocular and rectal swabs from 27 Gir lions which were sick and under treatment and observation at Sakkarbaug Zoo, Junagadh, Gujarat. The samples were referred to ICMR-NIV, Pune by Director, Sakkarbaug Zoo, Junagarh, Gujarat on 6th October 2018," the statement read. "Specimens were again tested for Canine Distemper Virus (CDV) by using molecular methods i.e. RT-PCR.."

The research body directed the state to vaccinate the lions against CDV. At present, most of the available vaccines are made up of CDV American genotypes 1 and 2. 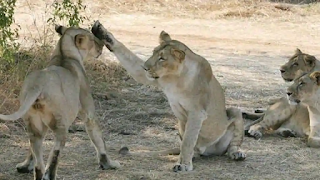 Posted by Kishore Kotecha at 11:35 AM