The state government on Friday deputed two forest officers who had previously served in the Gir forest to assist in the efforts of the local officers in Gir to tackle the situation arising out of deaths of 23 Asiatic lions in as many days. Meanwhile, vaccine imported from the US to contain a suspected attack of virus among lions reached Junagadh and forest officers said they would administer it to the big cats if warranted.

The state government asked Anshuman Sharma, deputy conservator of forests (DCF) of Godhra division, and Ram Ratan Nala, DCF in the publicity and liaison division in the state forest department in Gandhinagar to assist the local forest officers in Junagadh wildlife circle to mitigate situation arising out of deaths of 23 lions between September 12 and October 2.

"Sharma has previously served in Gir (east) division while Nala is a veterinarian by training. State government felt that they can help in tackling the situation. Being a veterinarian, Nala is supervising treatment being given to Asiatic lions at rescue centres while Sharma will also be of help as the deaths have occurred in Gir (east) forest division," Dushyant Vasavada, chief conservator of forests of Junagadh wildlife, circle told The Indian Express.

Sharma had served as DCF of Gir (east) division for around six years until his transfer around two years ago. On the other hand, Nala had served as assistant conservator and DCF in Gir (west) division as well as DCF of Sasan wildlife division and sanctuary superintendent at Gir National Park and Sanctuary in Sasan. He was transferred to Gandhinagar a few months ago.

The deaths of Asiatic lions have been reported from Sarasiya Vidi in Gir (east) forest in Amreli district. Laboratory tests have confirmed that four of the 23 lions had been infected by the dreaded canine distemper virus (CDV) while 10 others had been infected Babesia protozoa, an infection spread by tick parasite. After the deaths came to light, Akshay Saxena, principal chief conservator of forests (PCCF) and chief wildlife warden of the state as well as Shyamal Tikardarm additional PCCF in wildlife division in the state forest department have been camping in Junagadh and monitoring the situation.

After the sudden and mysterious deaths of lions in Sarasiya Vidi, forest department had rescued 31 lions from adjoining Shemardi area and shifted them to rescue centre in Jamwala in Gir (west) forest division and kept them in isolation as a precautionary measure and to contain spread of Canine Distemper Virus (CDV) infection. Two more lions have been rescued from the neighbourig Paniya area also and shifted to rescue centre in Babarkot in Amreli social forestry division. Three other lions rescued from Sarasiya Vidi rare undergoing treatment at Jasadhar rescue centre in Gir (east) division.

Meanwhile, 300 shots of vaccine imported from the US were delivered to forest officers in Junagadh on Friday evening. The vaccine, which gives immunity against a group of viruses, including the CDV, will be administered to the lions under observation if required, the Junagadh CCF said. "The vaccine lot has been delivered but we shall decide on case-to-case basis if it should be administered to lions. As of now, there is no such recommendation. Reports of blood profile of the lions which have been isolated and kept under observation are normal. We are waiting for laboratory reports of their other samples for deciding the next course of action," said Vasavada.

After the sudden deaths of Asiatic lions, an endangered species whose only wild population in the world is surviving in Gir forest and other protected areas, experts from Delhi Zoo, Indian Veterinary Research Institute, Bareilly, Safari Park, Itawa and Wildlife Institute of India, Dehradun had visited Gir forest and rescue centres, and made their suggestions to tackle the situation. The CCF said that the teams were in Gir till Tuesday. The state government has requested help from London Zoo and Royal Veterinary College, London also.

Meanwhile, the CCF quashed allegations levelled by Congress leaders of negligence on the part of forest officers and state government as the cause of deaths of the lions. 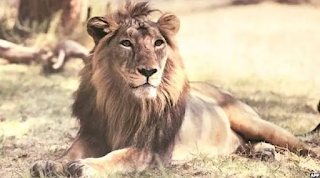 Posted by Kishore Kotecha at 3:15 PM