Today, to mark International Day for Disaster Reduction, World Animal Protection is urging the central government and all the state governments to ensure that efforts to reduce disaster risk include animal protection are in place.

India has been leading the way by integrating animals in the national disaster management policy, plans and as well as in the search and rescue operations.

Today we urge the Government of India to set up a Veterinary Emergency Fund for effective implementation of these initiatives.

Animal health, welfare and protection has massive implications for community nutrition, food security and agricultural output. 2.5 billion people around the world are small-scale farmers, herders, pastoralists, fishers or are forest-dependent - all of them rely on animals for their livelihoods. 18 of the poorest countries are reliant on livestock.

Animal-dependent communities are extremely vulnerable to natural disasters; many of the countries with the highest densities of livestock keepers are also those with high multi-hazard ratings. A comprehensive study of 78 post-disaster needs assessments, covering 48 developing countries, found that crop and livestock losses amounted to more than USD 24 billion.

World Animal Protection deploys teams around the world when disasters hit - most recently to Sulawesi, Indonesia, following the tsunami just a couple of weeks ago.

World Animal Protection recently responded to the Kerala floods in India by providing cattle feed and mineral mixture in the flood-affected areas of Alappuzha, Pathanamthitta, Kottayam, Ernakulam and Thrissur districts along with the Department of Animal Husbandry, Government of Kerala and the Indian Red Cross Society - Kerala State Branch. This flood relief operation for animals has directly benefitted 34852 animals and the livelihood of 12504 households.

Target C of the Sendai Framework, an international agreement adopted by UN member states with the aim of reducing disaster risk globally, is the focus of this year's International Day for Disaster Reduction. It centres on reducing disaster economic losses in relation to global GDP by 2030.

"To successfully reduce disaster economic losses, the protection of animals must be taken more seriously. We have seen economies and communities suffer from a lack of preparedness. It is essential that animal-inclusive disaster risk reduction strategies are adopted," added Gajender. 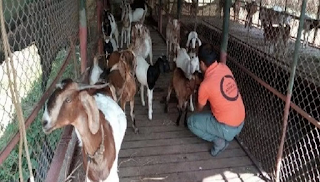 Posted by Kishore Kotecha at 5:22 PM