Gir lions will not be relocated, situation under control: Gujarat CM Rupani

Gir lions will not be relocated, situation under control: Gujarat CM Rupani

AHMEDABAD: Gujarat chief minister Vijay Rupani said Sunday lions in the Gir forest were safe and they would not be relocated.

Earlier in the day, the Forest Department started the vaccination of lions in the Gir sanctuary to protect them from a deadly virus blamed for the death of some of the big cats.

As many as 23 lions have died in the sanctuary in less than a month. Most of them have succumbed to canine distemper virus (CDV) and protozoa infections, forest officials had said.

"The situation in Gir is under control and the lions are completely safe in the forest. The state government is sensitive and committed towards the conservation of lions in the state, and lions will not be relocated," Rupani told reporters at Bilkha in Junagadh district where the Gir forest is located.

The lions, an endangered species, are being vaccinated under intensive veterinary care and as per standard protocol, officials said Sunday.

CDV is considered a dangerous virus and it was blamed for wiping out 30 per cent population of African lions in East African forests.

Rupani said the government had involved world-class experts to tackle the situation and control the spread of the deadly virus in the lions, adding their blood reports were negative.

The chief minister further said the government is planning to set up of best medical facilities to treat the lions.

A senior government official in Gandhinagar said only those lions which are in the Forest Department's captivity are being vaccinated at present.

Following the death of big cats, the department had captured 36 lions and shifted them to Jashadhar and Jamwala rescue centres in the Gir forest as a precautionary measure.

After the CDV spread was confirmed in Asiatic lions, the state government had urgently imported 300 shots of the vaccine against the virus from the US.

CDV is mainly found in wild dogs, jackals and wolves. The disease can be contracted by lions if they eat any animal infected by it.

CDV is a highly contagious disease that attacks the immune system and other vital organs in animals. In most of the cases, the infection is fatal.

The Forest Department officials also said the lions that were segregated for screening were doing fine, and no further death was reported.

The Supreme Court had in April 2013 constituted a committee to oversee transfer of lions from Gujarat to neighbouring Madhya Pradesh's Kuno-Palpur Wildlife Sanctuary, but no action has been taken in this direction.

The recent deaths of lions in the Gir forest has once again given rise to the demand for translocation of the big cats to ensure their safety.

According to the last census conducted in 2015, the number of lions in the Gir sanctuary stood at 523. 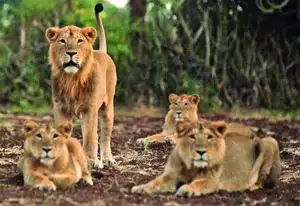 Posted by Kishore Kotecha at 2:28 PM