Ahmedabad: The Gujarat Forest department has formed 64 teams to screen and shift sick lions to rescue centres after carcasses of 11 big cats were found the state's Gir forest, a senior official said on Sunday.

The carcasses of 11 lions, including cubs, were found between September 11 and 19. Nine of those were recovered from Dalkhaniya range and two from the Jashadhar range of Gir forest.

A team comprising top officials and experts from the National Tiger Conservation Authority (NCTA) and Dehradun-based Wildlife Institute of India (WII), probing the death since arriving on Saturday, has stated in its preliminary report that the deaths were mainly due to infighting, and infection caused by resultant injuries.

Additional Chief Secretary (Forest) Rajiv Gupta told reporters Sunday in Junagadh that viscera samples of the 11 lion carcasses had been sent to Pune-based National Institute of Virology (NIV) to find out the exact cause of death.

"After analysing the reports from NIV, we will devise a long-term strategy to save lions" he said, adding the Central team had concluded that the deaths were not due to "unnatural" causes, such as intentional poisoning by humans.

He informed reporters that NTCA-WII team would remain in the state for a few more days to thoroughly probe the case.

Mr Gupta said 64 teams, having 270 personnel, had been formed to screen lions in Gir forest.

"Each team has a forester, two beat guards and one tracker. Veterinary doctors will assist these teams in identifying and rescuing sick lions and treat them at our rescue centres. We have also planned to vaccinate cattle near Gir area" the additional chief secretary (forest) said.

He said these teams would work under the supervision of Principal Chief Conservator of Forest (PCCF), Wildlife, Akshay Saxena.

The state government had on Friday claimed that three lion cubs were killed by a male lion to establish dominance and two lionesses and an adult lion died from respiratory and hepatic (relating to the liver) failure.

The post-mortem reports of five other lions, including two cubs and one lioness, were awaited, the forest department had said on Friday. 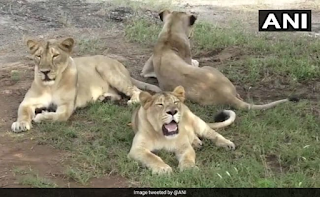 Posted by Kishore Kotecha at 5:45 PM