NEW DELHI: Carcasses of 10 more lions have been found in the forests of Gir in Gujarat, a week after a lioness and a cub died. 21 lions have died in Gir in the last 18 days alone. The rising number of lion deaths in the national park in such a short span of time is a cause of worry for forest officials and conservationists. Gir is home to India's entire population of around 500 wild Asiatic lions.

Infighting and infections in liver and kidney are the main causes for the recent death of lions, the Forest Department claimed.

As an immediate measure, Gir authorities have moved 31 lions to an animal care centre and have kept them in isolation.

"No lions were found dead in any other area, 31 lions from Samardi area have been rescued and kept in isolation. Their check-up is being done. We are taking all preventive measures," said Dushyant Vasavda, Chief Conservator of Forest (Wildlife) in Junagarh. The senior officer said.

Sixty four teams were formed last week to screen and move sick lions to rescue centres. A central government team of wildlife experts too had visited Gir to find out the reasons for the sudden death of lions.

Around 100 lions die annually, with the death rate peaking during monsoon. On an average, 31 to 32 lions in Gir die during the three months of monsoon every year, the Forest Department said.

Relentless development near Gir - roads through the forest in the 1,400-square kilometre-wildlife sanctuary, expanding villages and illegal mining - is also forcing animal-human proximity. 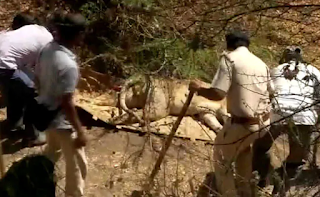 Posted by Kishore Kotecha at 6:26 PM