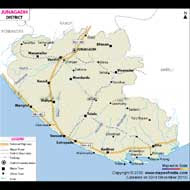 Two farmers were today arrested from Dhokdawa village in Junagadh district after a lioness was found electrocuted in their farm located on the periphery of the Gir Wildlife Sanctuary, a senior forest official said. "Jashabhai Bhagwan Badhaniya and his brother Jana Bhagwan Bandhaniya were arrested on the charges of electrocuting a lioness in their farm located at Dhokadwa village in Una taluka of Junagadh district under the Wild Life Act 1972," said Manishwar Raja, Deputy Conservator of Forest, Gir (east) division. The seven-year-old lioness was electrocuted at Dhokadwa village in Una taluka located on the periphery of the Gir sanctuary in Junagadh district on Monday night, he said. "The wild cat was found hanging inside a well located in the farm," Raja said. The arrested accused had erected an electric fence at their farm, apparently to prevent wild animals from entering and damaging the crops. Preliminary investigations have revealed the lioness had stepped on a live wire inside the farm when it strayed out of the forest area in search of food, Raja said. According to B T Ahir, Range Forest Officer, the Forensic team rushed to the spot after learning about the incident and conducted postmortem of the feline there. The charges could invite imprisonment ranging from 3 to 15 years.
Posted by Kishore Kotecha at 8:54 AM