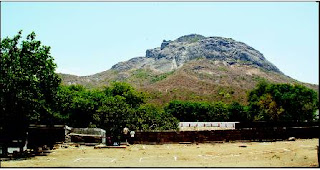 Environment minister Jairam Ramesh's decision to give a go-ahead for the ropeway project in Girnar wildlife sanctuary has been questioned by some members in the standing committee meeting of National Board of Wildlife (NBWL), who claim the project would lead to local extinction of long-billed vultures.

The ropeway will pass through a known breeding site of the long billed vulture — Gyps indicus — and if constructed, it would lead to its local extinction, NBWL standing committee member Prerna Bindra said in a recent meeting chaired by Ramesh, which gave a final nod to the project. Along with Bindra, another member Divyabhanusinh Chavda also expressed concern regarding the possible impacts would cause to the resident vulture population, according to a ministry document.
Bindra, who insisted that her note of dissent on the minister's decision should be officially recorded, said, "The critically endangered long billed vulture has seen a collapse of nearly 99 per cent of its population, and is categorised as critically endangered".
"Ironically, the vulture is part of MoEF's species recovery programme," she said. Citing a ministry report, Bindra said if the ropeway is constructed, it would lead to the local extinction of the long-billed vulture in north Gujarat. The ropeway over Girnar wildlife sanctuary will connect Bhavnath Taleti and Ambaji temples in Junagadh district. Ramesh, while granting the final goahead to the Girnar ropeway, had said height of the towers has to be increased to avoid disturbance to nesting sites of vultures. While granting conditional clearance to the project in February, Ramesh had asked the Gujarat government to submit a report within two months about its study to consider alternate alignment of the ropeway project to ensure that it does not cut across the prime vulture habitat.
But Gujarat rejected the minister's suggestion saying an alternate route was not feasible in the instant case, and requested the standing committee of NBWL to consider their proposal "in its original form without change in the alignment proposed".

WALKING THE TIGHTROPE
Posted by Kishore Kotecha at 10:22 AM

The Girnar ropeway is the need of the day. We the people of this region have been demanding sanction of this project for the last 20 years. The ropeway project will boost pilgrimage tourism in this region. It is expected that the number of tourists will incease by 20000000. This will generate extra revenue of Rs. 100 crore.