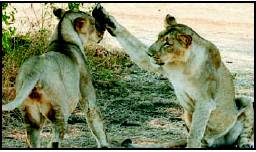 Remember the teenage lioness from Gir forest that was deserted by her pride after she had a fling with a lion and bore his cubs? After nearly four months, the pride has forgiven her for this affair outside the pride and taken her back.

Forest officials who were closely monitoring this teenage mother, said that after her cub grew up to be about six months old, she slowly started moving towards the pride. The group too accepted her along with the cub, the main reason was that the male lion, her father, had moved out of the territory in search of a new one of his own.

The lioness found it difficult to hunt. In absence of proper food, not only the cub but she too had become weak. This lioness, which gave birth to three cubs, was immediately driven out by her pride in the jungle in Dedakadi range of Gir. The pride even killed one of the cubs as she fled this western part of the sanctuary. The reason for this social ostracism among the big cats, according to keen observers of lion behaviour, is that the young lioness had mated outside the pride.

Senior officials said that the three year old lioness feared that the lions could attack her cubs again and kill them and this fear kept her too close to the cubs. Officials said the sub-adult mother did not even go out for hunting leaving the cubs alone. She always fed herself from leftovers.

Sandeep Kumar, the deputy conservator of forest who has been closely monitoring the activity of this lioness, said, "In absence of male lions, it is three females who are monitoring their territory. The male who was dominating the group is now searching for its own new territory." Kumar said. He further said that four sub adults from the pride have also begun moving searching for their own territory.

Posted by Kishore Kotecha at 4:40 PM