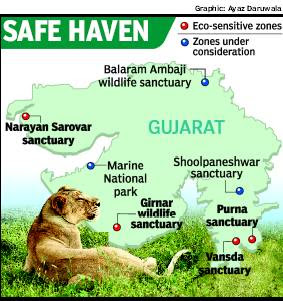 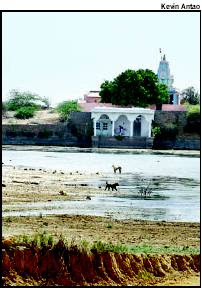 Industrial Activities To Be Restricted

Gujarat's wildlife just got a new lease of life. The Central government on Thursday declared the setting up of eco-sensitive zones in a five-km radius around four important sanctuaries — Gir, Purna in the Dangs, Vansda National Park in Navsari and Narayan Sarovar in Kutch.
The Supreme Court had directed the state governments to identify eco-sensitive zones around wildlife reserves. The Centre's stamp of approval came on Thursday.
The new guidelines on eco-sensitive zones ban construction, mining, other industrial activities and some tourism activities in these areas. Felling of trees, change in agriculture systems, commercial use of natural water resources, setting up of hotels and resorts, flying over in an aircraft or hot air balloon, discharge of effluents and solid waste in natural water bodies will be regulated.


Union environment minister Jairam Ramesh said the ministry is also considering Balaram-Ambaji in Banaskantha, Marine National Park, Jamnagar and Shoolpaneshwar sanctuaries for similar zones.
Ramesh in a letter to chief minister Narendra Modi said he hoped to finalise them in the next four weeks. Balaram-Ambaji sanctuary is known for sloth bears while Shoolpaneshwar has four-horned antelope and barking deer population.


Monitoring of the zones will be done by a committee headed by the district collector. Other members will include a representative from the Union ministry of environment and forests, regional officer of the Gujarat Pollution Control Board, the local town planner and the deputy conservator of forests. The notification issued for Gir sanctuary says 8,318 hectares have been declared eco-sensitive in Junagadh and Bhesan talukas of Junagadh district.
In Narayan Sarovar, 22,588 hectares of Abdasa, Lakhpat, Nakhatrana talukas in Kutch are now eco-sensitive. The eco-sensitive zone of Purna sanctuary will cover Ahwa and Songadh while that of Vansda sanctuary will cover parts of Ahwa, Vansda and Vyara. Ten-member panel to monitor eco-sensitivity violations
Ahmedabad: A ten member monitoring committee will not only enforce the guidelines of eco-sensitivity, but it will also be responsible to file complaints for violation if any. This was revealed in the notification issued for eco-sensitive zone by the Union ministry of environment and forests, Government of India on Thursday.
Of the ten member committee headed by the collector, five have already been fixed by the Union ministry of forest and environment, while the other five have not been specified yet.
The committee will however, not be empowered to give environmental clearance. "If any activity requires prior permission or environmental clearance, such activities should be referred to the state level Environmental Impact Assessment Authority which is the competent authority for giving such clearances," said the notification.


The notification further said that the committee may invite representatives or experts from concerned department or associations to assist in deliberation of the issues. However, these members would be made permanent members of the committee.

Also the notification further said that the chairman or the member secretary of the committee shall be empowered to file complaints under the Environment Protection Act of 1986 for non-compliance of the provisions of the notification issued for the eco-sensitive zone.

Not just meeting, but the committee will have to submit a report about the action taken at the end of every financial year that is by March 31 of the each year.

The ministry of forest and environment shall give directions from time to time to the committee for effective implementation and monitoring of eco-sensitive zones.

The Narayan Sarovar in Kutch
Posted by Kishore Kotecha at 10:27 AM