Deputy conservator of forest Sandeep Kumar was on one of his routine rounds of the sanctuary earlier this week in the Paniya area when he saw two sub-adult cubs with a pangolin. Pangolins, which are anteaters, are not a usual sight in the Gir sanctuary.

This pangolin had strayed into the lions' den, and lived to tell the story. The anteater smelt danger and tried to move away, but it was surrounded by lions. In all, the pangolin encountered eight lions. As soon as the lions tried to bite into the softer parts of its body, the pangolin curled up into a ball, displaying enormous strength by foiling attempts to unroll it.

K u m a r said, "While patrolling, I witnessed this encounter where a pride of five sub-adult lions was surrounding the pangolin in a predatory mode." The incident repeated at another place just about a kilometre away where a lioness with her two cubs tried to corner the same pangolin.

"In my experience, it was for the first time that I encountered such an amazing event where an unusual prey was being attacked by lions," said Kumar. Lions are known to prey mostly on large-size animals in comparison to leopards prey on animals as small as rodents to large ones like the sambar deer. During the encounter, the lions repeatedly tried to unroll the pangolin but the pangolin did not give up. During the whole encounter, the only sound produced by the pangolin was a loud hiss, which is usually produced under the stress.

Kumar said "I have not encountered too many pangolins in Gir Sanctuary, in my two and half year tenure, I have only encounter pangolins on four occasion. The department is now planning to have a proper estimation of the population of Pangolins in the Gir sanctuary and also nearby areas. 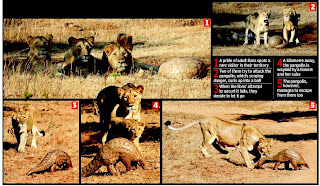 1 A pride of adult lions spots a rare visitor in their territory 2 Two of them try to attack the pangolin, which, sensing danger, curls up into a ball 3 When the lions' attempt to uncurl it fails, they decide to let it go 4 A kilometre away, the pangolin is waylaid by a lioness and her cubs 5 The pangolin, however, manages to escape from there too 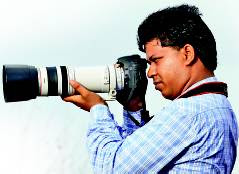