What's stopping the Asiatic lions of Gir from getting a new home?

What's stopping the Asiatic lions of Gir from getting a new home?

The tiger is the big cat the country usually obsesses over. A National Tiger Conservation Authority is tasked with the protection of India's national animal. There are 50 tiger reserves and these enjoy a high level of protection. Of the Rs 555 crore the Centre set aside for wildlife habitat development in 2018-19, two-thirds were for tiger conservation. Naturally, therefore, the death of a tiger or a change in its population is widely reported.

But in the past month, another big cat has been all over the news, and for all the wrong reasons. Since September 12, 24 Asiatic lions have died in the Gir National Park and Wildlife Sanctuary in Gujarat, the only place in the world where the species is found now. (African lions are found in the sub-Saharan region.)

At least four of them were found to have had canine distemper virus (CDV), which affects a range of wild animals, and seven were discovered to have had a protozoan infection, transmitted by ticks. Infighting has also been cited as a cause of death, but it is not clear how many lions died due to this. Thirty-six lions are under observation, with three being treated for protozoan infection, according to Dushyant Vasavada, chief conservator of forests of the Junagadh wildlife circle, which includes Gir. Twenty one of the 27 lions tested, out of the 36, have also tested positive for CDV.

The deaths have again brought to the fore a 25-yearold demand of wildlife activists — move some of the lions to the Kuno-Palpur Wildlife Sanctuary in Madhya Pradesh — to avoid exactly the kind of deaths that are happening. An epidemic or natural calamity can wipe out a species if the population is concentrated in one area. Under such circumstances, translocating is a way to protect a species. But the efforts of the activists have not been successful due to reasons that are seemingly political.

In April 2013, the Supreme Court asked the Union government to translocate some lions to Kuno. It said, while hearing a petition, the Asiatic lions existed in a single sub-population and were vulnerable to extinction from unpredictable events, such as an epidemic, a large forest fire, etc. "An outbreak of possible epidemic or natural calamity might wipe off the entire species. A smaller population with limited genetic strength are more vulnerable to diseases and other catastrophes in comparison to large and widespread population," the court said. But the Gujarat government has citied one reason on the other and not moved any lions. A few days ago, Vijay Rupani, chief minister of Gujarat, said the lions were "completely safe" in Gir and would not be relocated.

The state's reluctance to move the lions, considered "Gujarat's pride", to the Madhya Pradesh sanctuary is purely political, says Bhikhu Batawala, a lion conservation activist. It has nothing to do with doubts about the act of translocation itself, which has been effective in most cases in India and other countries. "Some translocation projects are discussed a lot," says Ravi Chellam, a conservation biologist who has studied Gir's lions extensively. "But translocation happens almost on a daily basis as part of our wildlife management for a very wide range of species in India, which is not well known."

All Eggs In A Basket

According to the International Union for Conservation of Nature (IUCN), translocation is the human-mediated movement of living organisms from one area to another. It is done to enhance or reduce populations of some species, to improve ecosystems, to reduce human-animal conflict or for recreational or commercial purposes. Translocation in the wild in most cases is referred to as reintroduction, as translocating a species to an area that is not a part of its indigenous range can have extreme adverse ecological, social or economic impacts. Done properly, it can help grow the population of a species. Translocation has seen great success in South Africa, says Matthew Hayward, associate professor at Australia's University of Newcastle. From 1979, several thousands of animals have been translocated successfully.

India accounts for only 2.4% of the world's land area, but has 7-8% of all recorded species. Of the 5,739 Indian animal species evaluated by the IUCN, 80 are critically endangered, 210 endangered and 401 vulnerable. The Asiatic lion was critically endangered till 2008, but has since been upgraded to the endangered category. Its population has nearly doubled from 327 in 2001 to around 600 in 2018 at Gir, spread across 1,400 sq km. This means twice the number of lions will have to make do with the same area, making them more prone to diseases and infighting. "It's like putting 600 eggs in one basket," says wildlife biologist Faiyaz A Khudsar, who filed a public interest litigation in the Supreme Court calling for the translocation from Gir.

Overcrowded sanctuaries also force lions to roam outside the protected area. In 2016 and 2017, for example, 32 of the 184 lion deaths were due to unnatural causes.

Diseases can also wipe out the lions. A 1,000 lions, or a third of the population in the Serengeti National Park in Tanzania, died of CDV in 1994. "Given that it is already an inbred population with much reduced genetic diversity, Asiatic lions have to be managed even more careful," says Chellam, who was on the expert committee appointed by the Supreme Court to help with the translocation.

A 1995 report coauthored by Chellam had identified three sites, including two in Rajasthan, for translocation from Gir. But it finally settled on Kuno. The Madhya Pradesh government then resettled more than 1,500 families in 24 villages outside Kuno to make space for the lions.

But Gujarat, where Prime Minister Narendra Modi was chief minister between 2001 and 2014, has continued objecting to the translocation. The state cited, among other reasons, the lack of an adequate prey base — the assemblage of animals in an area that a predator can consume — in Kuno and the presence of a few tigers there.

Experts have countered these claims. In fact, the prey density per sq km in Kuno is 80, compared with 56 in Gir. The biomass of the prey base in Kuno is 3,520 kg, a fourth higher than in Gir, according to a 2012 study presented to the Supreme Court.

India has had several successful reintroduction efforts for tigers, rhinos, swamp deer and ghariyals. The Panna Tiger Reserve in MP had lost all its tigers to poaching by 2008. Six tigers from Kanha, Bandhavgarh and Pench (all in MP) were reintroduced in Panna between 2009 and 2014. The tiger count in Panna has since reportedly risen to around 30. The Sariska Tiger Reserve in Rajasthan has 17 tigers now after the reintroduction of eight from Ranthambore, also in Rajasthan, between 2008 and 2012. The first inter-state tiger translocation, from MP to Satkosia Tiger Reserve in Odisha, is underway. Reintroduction also helped the Manas National Park in Assam, which was badly affected in the Bodoland conflict from the 1980s to the early 2000s. Since 2006, 27 rhinos have been reintroduced from Kaziranga and Pobitora sanctuaries, among others, and in 2014-15, 36 eastern swamp deer were translocated from Kaziranga. HK Sarma, field director of Manas, says the park will also get 40 spotter deer from Chhattisgarh by 2020 in exchange five female wild buffaloes. Six orphaned elephant calves, raised at a rescue and rehab centre, were also translocated to Manas earlier this year. Several gharials, a critically endangered species, have also been reintroduced into the Ganges and Beas after being reared in captivity.

While translocation for purposes for conservation is recommended, the same cannot be said for mitigating animal attacks on humans. "Moving problem animals is a fairly ineffective solution to human-wildlife conflict," says Hayward.

Vidya Athreya, an ecologist with the Wildlife Conservation Society-India, concurs. Following attacks on people, 29 leopards in the human-dominated rural parts of Junnar in Pune district were moved to forests 40 km away. But attacks on humans near the release site went up, a research paper she coauthored revealed. She says it's harder to move adult wild animals than young ones. "They (adults) have site fidelity. They know where their resources are."

While translocation may not be the answer to reduce human-animal conflict, there is enough evidence that, done right, it is an effective conservation tool. Will Gujarat's pride prejudice the lions? 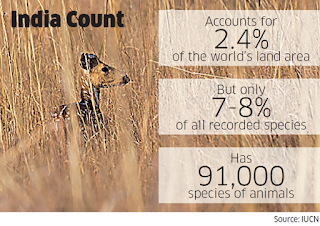 Posted by Kishore Kotecha at 5:44 PM