Earlier this week, Gujarat's treasured wildlife reserve suffered a shocking jolt in the form of mass lion deaths. 11 lion carcasses were reportedly found in the East division of Gir forest. And the deaths have presumably taken place within 10 days as stated by east Gir's Deputy Conservator of Forest, P Purushothama.

While an inquiry is being conducted, it is suspected that the deaths may have occurred due to infighting and disease according to reports.

While some have presumably died in infights, others, including three lion cubs, are suspected to have contracted a fatal illness.

Infighting in the wild mostly occurs when natural resources are scarce and animals encroach upon each others' territory for basic necessities. If we don't check our misuse of natural resources more and more such appalling news will keep surfacing from time to time. 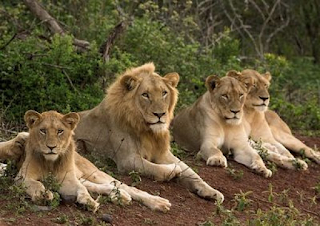 Posted by Kishore Kotecha at 6:40 PM