An Asiatic lion fell down in an open well of Devla village in Dalkhaniya range of Gir (east) forest in Amreli district Sunday. However, the animal was rescued by the forest department and released in the wild again hours later.

Residents of Devla, a village around 15 km away from Dhari village, the headquarters of Dhari taluka in Amreli district, alerted forest department early on Sunday that a lion had fallen down in an open well belonging to Devla village panchayat. "We received the message at around 7:30 am that an animal had fallen down in the well. Our staff managed to rescue the animal after a one-and-a-half-hour-long operation. It was a lioness around three to four year of age. It had not sustained any major injury," a forest officer of Gir (east) forest division said.

Devla village is located around six kilometre away from Gir forest bordering Gadhiya village. The area is part of Sarasiya round in Dalkhaniya range of Gir east forest. The incident comes weeks after the death of 23 Asiatic lions in Sarasiya Vidi in Dalkhaniya range due to an outbreak of canine distemper virus (CDV) and also due to fighting among lions.

Junagadh wildlife circle chief conservator of forests (CCF) Dushyant Vasavada told The Indian Express that the lioness has been shifted to Ambardi Safari Park near Dhari. "She will be kept under observation for some time and if everything is found normal, she will be released in her territory," he said.

Later in the evening, local forest officers said that the lioness had been released in the wild.

After initial deaths of 13 lions in Sarasiya Vidi between September 12 and September 24, the forest department had rescued remaining the 13 lions from that forest and shifted them to Jasadhar Rescue Centre. However, by September 29, 10 of them died during treatment while the remaining three are still being given treatment.

After National Institute of Virology, Pune confirmed that samples drawn from some of the lions had returned positive for the contagious CDV, the forest department had rescued 31 lions from adjoining Semardi area as well as two from the neighbouring Paniya range. The lions rescued from Semardi have been kept under observation at Jamwala Rescue Centre in Gir (west) forest division while the two of Paniya have been shifted to Babarkot Rescue Centre in Amreli social forestry division. All the lions rescued from Sarasiya Vidi and adjoining areas have been given doses of CDV vaccine imported from the US.

"All the rescued lions are healthy and they continue to be under observation," the CCF said, adding that a drive to vaccinate cattle and dogs in villages falling in and around Dalkhaniya range was ongoing. 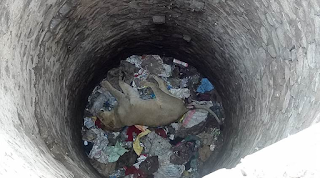 Posted by Kishore Kotecha at 2:01 PM