he Gir sanctuary in Gujarat is the last abode of Asiatic lions.

The Asiatic lions seem to be in danger, especially after carcasses of 14 lions, including cubs, were found between September 11 and 25 from Gir (east) forest range.

Nine of these were found in the Dalkhaniya range and two were recovered from the Jashadhar range.

Forest department formed 54 teams to screen lions to find out if they are suffering from any disease.

One lioness died during treatment conducted by the team of officials.

What is the reason behind the death of these 14 lions? Was a foul play involved?

Most of the deaths are due to infighting and injuries caused thereby, mainly affecting cubs and females. This trend is being noticed over a period of three to four years.

No foul play or suspicion is suspected, said Principal Chief Conservator of Forests (PCCF) for wildlife, A K Saxena.

All about the Asiatic lion

Nearly all wild lions live in Sub-Saharan Africa, but one small population of Asiatic lions exist in India's Gir Forest

Asiatic lions and African lions are subspecies of the same species

Lions are the only social cats that live in groups, called pride. Pride are family units that may include up to three males, a dozen or so females, and their cubs

All of a pride's lionesses are related and female cubs typically stay with the group as they age. Young males eventually leave and may establish their own pride by taking over a group headed by another male

Asiatic lions once prowled from the Middle East to India. Now, only a fraction of these magnificent animals survives in the wild.

At least 200 of these lions are living in unprotected areas outside sanctuaries.

The heavily protected Gir sanctuary has the ability to support a specific and often fixed number of species, which is 300 lions.

Due to this, the lions started moving out of Gir in 1995 as the population exceeded the capacity.

What are the other reasons behind the death of Asiatic lions?

The average lifespan of these lions is between 15 and 16 years, but many become old after nine or 10 years

32 deaths were caused by unnatural causes. These include electrocution and being hit by speeding vehicles and trains while crossing highways and railway tracks

In 2016, Ram, one of India's oldest and most popular lions died from old age in Gir.

Measures drafted by the central government to protect the Asiatic lions

Senior advocate Hemang Shah, appointed as an amicus curiae by a division bench, submitted a report to the Gujarat High Court suggesting the following measures:

2. Penalising people who put up electric fences around their fields and properties. Also, criminal cases involving such persons should be 'fast-tracked by hearing them on a day-to-day basis without the provision of any adjournment.'

3. Installation of cameras and speed guns at every 500 metres to ensure vehicles passing through roads near the Gir forest do not knock down lions.

4. The entire area falling within the eco-sensitive zone should be declared as no mining zone. If there are any open mining pits then the same should be forthwith be filled.

It is expected that the suggestions listed in the report would be discussed during the next hearing of the case scheduled on October 3, 2018. 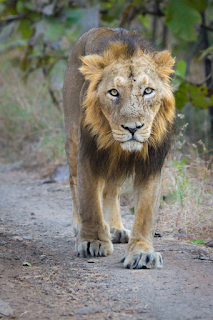 Posted by Kishore Kotecha at 7:04 PM