A lion was found dead on an agricultural farm at Kalavad village of Visavadar taluka in Junagadh district on Sunday, forest officers in Gir (West) said on Monday. The death of the lion comes within three weeks after the death of 23 Asiatic lions at Sarasiya Vidi in neighbouring Gir (East).

According to the Forest Department officials, a farmer of Kalavad village alerted them of foul smell emanating from a section of his farm. "A sub-adult male, aged between two to three years, was found dead in the farmland.

Vasavada said that prima facie the carcass did not bear any express signs of unnatural death. "No sign of unnatural death has been found. Post-mortem has been conducted and the report is awaited. Samples have also been drawn from carcass and sent for laboratory tests," the CCF added.

With this, the number of deaths of the top predators in Gir has gone up to 24 in around a month. As many as 23 big cats had died between September 12 and September 29, in Sarasiya Vidi in Dalkhaniya range of Gir (east) forest in Amreli district which shares its border with Junagadh.

Laboratory reports have confirmed that deaths in Sarasiya Vidi were due to an outbreak of canine distemper virus (CDV), a contagious disease which had wiped out around 1,000 lions in Tanzania in 1990s, and also due to infighting.

Following the confirmation of viral and bacterial infection in Sarasiya Vidi, forest department had rescued 33 lions from nearby forest areas and administered them CDV vaccine and kept them under observation at Jamwala Rescue Centre in Gir (West) and at Babarkot Rescue Centre in Amreli social forestry division.

Asiatic lions are an endangered species and Gir forest and other protected areas spread across Junagadh, Gir Somnath, Amreli and Bhavnagar districts are its last abode in the world. 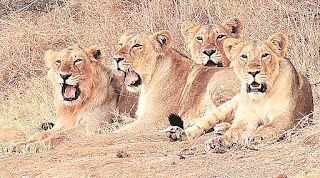 Posted by Kishore Kotecha at 1:10 PM