11 Lions Die In 8 Days In Gir Forest, Officials Say Deaths Due To Infighting And Not Foul Play

11 Lions Die In 8 Days In Gir Forest, Officials Say Deaths Due To Infighting And Not Foul Play

Gir Forest National Park in Gujarat witnessed the death of 11 Asiatic lions over a period of just eight days.  The State Government had ordered investigation aftermath of this serious incident. The deaths were reported from Dalkhaniya range (East division of Gir forest) and the 11 bodies included three adult females, two adult males and six cubs.  Ruling out foul play, officials on September 21 have said that the deaths have occurred primarily because of infighting.

Lion deaths occurred due to infighting

GK Sinha, the  Principal Chief Conservator of Forest and Head of the Forest Force (PCCF-HoFF) said "Total 11 deaths of lions, two adults male lions, three adult lioness and six cubs, have been reported from Dalkhaniya and Jashadhar ranges of East division of Gir Sanctuary. After spot inspection and study of the post-mortem reports, primarily, infighting or territorial fight has come out as the main reason behind these deaths," as reported by The Indian Express.

Lions live in prides, and one male lion controls each pride. When the controller of the pride becomes weak due to illness, lions of other territories try to covet the territory, if they succeed in defeating the head of the pride, they tend to kill the cubs and sub-adults and take charge of the female lions. There is a possibility that after the fight, the lioness and the cubs fled the region to hide, where they died of starvation and infections,  explained Sinha.

He has also informed the daily that while the postmortem reports are still awaited, the officials have found injury marks on the bodies of the dead lions which are identical to the ones they get during infighting and not during man-animal conflicts. Moreover, as a precautionary measure, five adult lions and lionesses have been rescued from the sanctuary and have been kept separately.

A top official of the department contradicted what Sinha addressed, saying that usually Lioness stay away from infights and maintain a safe distance, according to a TOI report. Moreover, Parimal Nathwani, Rajya Sabha MP has ordered a probe into the death of the threatened species.

The incident is of particular importance because, 2015 data shows that there are 523 lions in Gir forest, and The International Union of Conservation of Nature (IUCN) has declared that these species are threatened and are restricted to India's Gir Forest. Endangered species are protected under the Wildlife act 1972.

History of Lion deaths in and around Gir Forest

Earlier this year, on March 2018, the Gujarat Assembly, after being informed by State Forest Minister Ganpat Vasava, announced that 32 Asiatic Lions died due to "unnatural causes" in and around Gir Wildlife Sanctuary, over the last two years. These unnatural causes include falling into the well and being hit or run over by train. A total of 184 Asiatic lions died in 2016 -17, wherein  104 deaths occurred in 2016 and 80 deaths in 2017.

The Apex Court order to shift Asiatic Lions in 2013

In April 2013, Supreme Court ordered the shifting of limited Asiatic Lions from Gujarat to Madhya Pradesh's Kuno Palpur Wildlife Sanctuary. It directed a 12-member expert committee to implement its order.

The court said that these lions are endangered species, and all efforts should be made to preserve them including their translocation in limited number to MP. However even years after this order by SC the translocation is delayed.

Records say that six Asiatic lions were poached in two different incidents in March 2007 at Gir Sanctuary.  Police arrested 35 members of Pardhi tribe, known for poaching of lions since generations. One of the most wanted accused was arrested in 2017 in Fatehpur by Gujarat Anti-Terrorist Squad team. 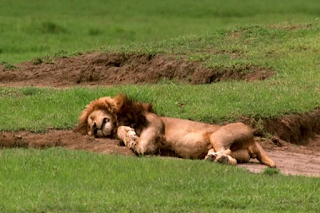 Posted by Kishore Kotecha at 4:14 PM