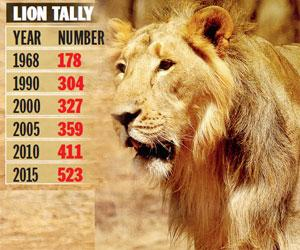 The remarkable growth of lion population in the state (by 27 per cent), is not just a matter of joy but one of concern too. Especially, considering the possibility of conflict between man and animal in the new territories where the animals have been spotted. The recent headcount of the majestic animal revealed that lions cover an area of 22,000 sq km in the state. Of 523 lions, 93 have moved beyond the limits of the Gir Forest National Park — the count was 74 in 2010.

This movement indicates that the conflict between man and animal has increased and is moving to other areas, too. In this scenario, shifting the lions to another state may not be the ideal solution. That, in fact, lies with the people of Gujarat, especially the people settled in Saurashtra. As per reports, lions have been spotted in territories outside Junagadh, with several being spotted in Amreli (Savarkundla, Rajula, Jafrabad towns), Bhavnagar, Mahuva also the riverbank of Shatrunjay in Palitana. Going by its nature, lions never adopt to a new place unless well acquainted with the land.

In the case of these new places, which lack forest cover, lions have found shelter in bushes and farmlands. The animals have been moving out of Gir to these lands in the last few years, but have always returned to Gir. This time around, the lions did not return to the Gir Forest National Park. Not surprising since the capacity of the park was surpassed a decade ago. As per statistics, Gir has space for not more than 275 lions, forcing the exceeding numbers to move out. In such a situation, there is an urgent need to create awareness among residents of these new territories on how to 'behave with lions'.

This should be among the state government's top agendas. And it is possible! The Maldharis of Gir have been maintained this decorum since decades and now the people living in other parts of Saurashtra need to adapt this style of dealing with lions. A lion's behaviour changes as do the phases of his life. For instance, it requires complete privacy when mating. But is approachable if it is alone. During our days in the Gir forest, we encountered lions several times; we would maintain proper distance and the lion would walk away. But not maintaining this decorum may result in conflict between man and animal.

That is why there is an immediate need to help people develop a rapport with the lions. The government should start camps and awareness programs to help the residents deal with this change in their environment and be prepared for situations. For instance, how to react and what to do when a lion enters your farm? Interestingly, the lions seem to be loving their new habitat considering the success ratio to get prey is 8:1 in the forest but 3:1 in the new habitat. People of Saurashtra love lions and aren't bothered even if their livestock is destroyed occasionally.

And several take pride when they spot an Asiatic lion. But there is a limit to their tolerance. Unless awareness is created and a harmonious method of living is formulated, there is a likelihood of conflict between man and animal, leading to hatred. After all, we cannot grow forests and will not be able to tell people to make space for lions or reduce farm land. So the best option is to learn how to live with the 'pride' and maintain the dignity of the Asiatic lions.

Posted by Kishore Kotecha at 7:28 PM