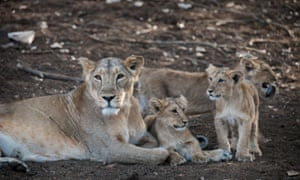 Asiatic lion (Panthera leo persica), are the smaller cousins of African lions. Above, a lioness with her cubs, in Gir Interpretation Zone or Devalia safari park, in Gir forest in Gujarat, India.

Wildlife experts have welcomed census figures showing India's population of endangered Asiatic lions has increased in the last five years in the western state of Gujarat.

The census was conducted over five days earlier this month in the 20,000 sqkm (7,700 sq m) sanctuary and surrounding forest lands.

"There are 109 male lions, 201 females and 213 cubs in the Gir sanctuary and nearby forest areas of Junagadh district," Patel said on Sunday.

Officials have said the experts conducting the census used a combination of direct sightings, photographs and GPS tracking technology to document each lion and avoid double counting.

About 2,500 people, including wildlife experts from India's top universities, participated in the counting process.

WWF India director Diwakar Sharma welcomed the numbers but said the larger population posed challenges for managing their habitat and conflict with humans.

"This is good news on the conservation front but bigger populations in bigger areas increases the challenge of managing land, human and animal conflict," he told AFP.
"There (also) has to be some other place far away from Gir (for lions) so that in a time of catastrophe, we don't lose the population."

The Gujarat government is fighting a Supreme Court ruling in 2013 for some of the lions to be moved to a wildlife sanctuary in a neighbouring state to ensure their long-term survival in case of disease.

The cats are a subspecies of lion which are slightly smaller than their African cousins and have a fold of skin along their bellies. They are a major attraction for tourists to Gujarat.

India faces intense international scrutiny over its conservation efforts because it is home to many endangered species, including tigers.

Conservation efforts were hailed in January after 2,226 tigers were spotted in a country-wide census, a 30% increase in the population from 2010.

Authorities across Asia are waging a major battle against poachers, who often sell tiger body parts to the lucrative traditional Chinese medicine market, as well as other man-made problems such as habitat loss.

Posted by Kishore Kotecha at 7:50 PM