As jungle sheds its leaves, lion census to start in Gir today

02/05/2015
As jungle sheds its leaves, lion census to start in Gir today
The Indian Express
http://indianexpress.com/article/cities/ahmedabad/as-jungle-sheds-its-leaves-lion-census-to-start-in-gir-today/

The bare trees of the dry deciduous Gir jungle will only prove a blessing to spot the big cat, as the census begins Saturday.

At 40 degrees Celsius, the jungle is quiet late afternoon but for the dance and song of Indian magpie, this being its breeding season, and sweet call of the Rofous treepies which are in search of prey. Herds of spotted dear are trying in vain to shield themselves from the burning sun as majority of trees have shed their leaves. Groups of peacocks and peahens are searching for food in soft soil under dead-looking babul trees. Monkeys have hid themselves amid the comparatively dense banyan trees.

In Kerambha area of Gir National Park and Wildlife Sanctuary (GNPWS), two female sambars are drinking water from an artificial point. With the approach of a tourist gypsy, the animals try to run away but they are visible for quite a distance.

River Hiran still has life while other streams have run dry. The teak trees — the dominant species in the deciduous Gir forest — the Kher (acacia chundra) and other trees of acacia genus are all bare. Grass has whittled away and has been replaced by a mat of fallen leaves.

Other patches where there are no tree are all dust. However, sprouts on boughs of Timru (xanthoxylum aramattum) and Karamda (carrisa carandas) indicate that there is some life in the forest. Jamun trees are still green but they are few and far between, mostly lining banks of major streams flowing through the the jungle.

Kanbhai Sindhal, a maldhari of Gangajalia nes (the local term for a maldhari settlement) or cattle herders colony inside the GNPWS and his wife Gali are on their way back to their hut after loading cakes of buffalo dung on their camel from a water point in Bhandargala area.

A little farther, at a location called Bavalwali Kudi, Dahyabhai Kodiyatar, a maldhari of Dudhala nes, is out grazing his herd of buffaloes and cows. "A few days ago, some forest guards told us that lion census is going to be conducted very soon and asked me to inform them if I find any lion," Kodiyatar reveals.

Though the forest is sleepy, tourist guides and safari drivers are quite excited about the census. "It will be a wonderful experience to know how this census exercise is conducted. They had roped in guides for the herbivore census last year. I just hope that I am given a chance to be part of the lion census also in some capacity. I have seen much forest but never experienced how it feels at night," said 20-year-old tourist guide Roman Shekh.

Shekh, a son of a forest trekker and resident of Sasan …continued »

Gir, abandoned studies after Class XII and started working as a guide two years ago.

Nagesh Ratadiya, a safari driver, said it would be an opportunity to see parts of forests usually not accessible to the public. "I don't know much about wildlife but I am interested in it. So, I am pretty excited about the census, hoping I will be selected for some role in it," Ratadiya, a history graduate said.

For Shekh and Ratadiya, it will be their first-ever experience of census. But enthusiasm is not any less among those who have been part of previous exercises. "I have seen much of around 250 square kilometre tourism zone as I have been driving gypsy for the last 12 years. But I am still excited about the census as this can give me an opportunity to explore new parts of lion territory. It was a unique experience when we finally managed to track down a lioness on the sea cost of Una during 2010 census after two days of efforts. I hope I am assigned some new area this time," said Imtyaz Bloch, a gypsy driver.

There are 75 tourist guides and 150 gypsies. Forest officers said they would take help of guides and drivers and have already initiated process to requisition 125 safari vehicles.

It's around 5.30 pm and the sun has turned a little mild. Hearing warning calls of a spotted deer, a guide asks driver to stop the gypsy in Navi Raidi area. Soon, other vehicles also line up. Two trackers are sitting under a bush waiting for the lions to move out from the bed of a small stream. Tourists wait for almost half an hour but the jungle king refuses to show up. Finally, impatience gets to the tourists and they decide to end the safari.

"At this time of the year, trees shed their leaves and therefore visibility increases. More importantly, lions become localised due to shortage of water and this helps covering almost each and every animal during the census. The exercise will be conducted during full-moon night when lion activity remains high," said Sandeep Kumar, deputy conservator of forest (DCF) at Sasan wildlife division. The DCF is executing census drive. 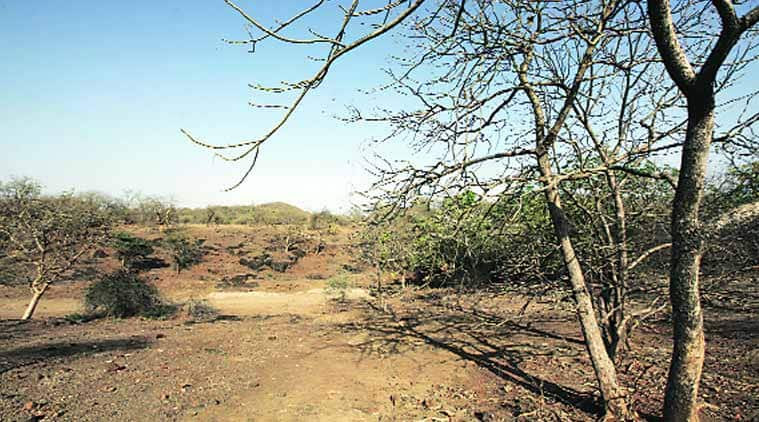 Most of the trees in Kali Chhipardi area of Gir National Park and Wildlife Sanctuary have shed their leaves.

Posted by Kishore Kotecha at 7:26 PM