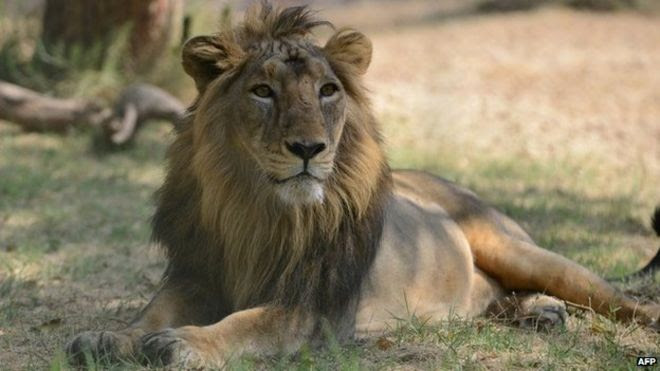 India says it has more Asiatic lions than it did five years ago.

The lion population had risen from 411 in 2010 to 523 in 2015, Gujarat Chief Minister Anandiben Patel said, quoting the findings of the latest lion census.

Gir forest in the western state of Gujarat is the only home to Asiatic lions.

Once widespread in Gujarat, their numbers shrank to a mere dozen in the early 20th Century, mainly due to hunting and drought.

However, in the last century their population has soared, thanks to a ban on lion hunting and several preservation measures.

The latest census conducted earlier this month by 2,500 officials and volunteers found 109 adult males, 201 adult females and 213 cubs over 21,000 sq km area of Gujarat's Saurashtra region - which includes Junagadh and 10 other districts.

Forest official CN Pandey told BBC Hindi's Ankur Jain that the lions were photographed and tagged by GPS during the census.

"Enumerators recorded unique identification marks like scars on the face, the shape of ears, tuft of hair on tail, colour, and belly folds. Using all this information with location details we removed overlapping and reached the final count," said Mr Pandey.

But the increase in lion numbers has posed fresh challenges to their safety, our correspondent says.

Environmentalists say some 40% of the lions now live outside the forest area and 260 lions have died in the past five years.

They say open wells and live wires on farms, poachers and passing trains and trucks have turned the Saurashtra region into a "death field for the Asiatic lion".

Also, man-animal conflict has grown - lions have killed 14 people and wounded 114 others in the past two years.

Posted by Kishore Kotecha at 4:06 PM