‘Amreli lion numbers up, may need another reserve’

'Amreli lion numbers up, may need another reserve'  The Economic Times
http://economictimes.indiatimes.com/news/environment/flora-fauna/amreli-lion-numbers-up-may-need-another-reserve/articleshow/47126688.cms
AHMEDABAD: The state may soon need a second sanctuary for Asiatic lions on the banks of river Shetrunji if the forest department's initial estimate of the big cat's population outside Gir sanctuary turns out to be true. (In fact, the forest department wants a second sanctuary for the growing population of lions.) The main lion census in Gir and surrounding areas that is to take place between May 2 and May 5 may confirm the forest department's initial estimates.  Sources in the forest department said the lion population has grown considerably in Amreli district, including Liliya, Kakraj, Khambha, Mitiyala and Savarkundla talukas.  In Amreli district and areas adjoining Savarkundla and Bhavnagar— all of which are located outside Gir sanctuary — officials estimate that the lion population has increased by around 80% in comparison to 2010. In 2010, areas around Savarkundla and Bhavnagar had reported 53 Asiatic lions while there were 21 lions in the  coastal areas.  Sources said that, according to reports, the population of the big cats has grown in Lathi, Liliya, Kakraj, Savarkundla, Bhavnagar and even in coastal areas. In the 2010 census, there were 297 lions in Gir sanctuary and nearby areas while another 114 big cats were found outside the sanctuary area, officials said.  They further said that the increase in lion population will be more in areas outside Gir sanctuary while the numbers are likely to be constant mainly in Junagadh and Gir Sanctuary. Gir sanctuary and nearby areas have a capacity of not more than 280 lions and, for this reason, the big cats were moving out of the sanctuary because of their growing numbers, said officials.  According to a 'kill and scat' analysis, the lion population in Gujarat is now spread over an area of 20,000 sq km; in 2010, they were spread over an area of only 10,000 sq km.  The officials said that the state government had proposed a separate lion conservation reserve in Bhavnagar district of Gujarat. After the 2015 census, efforts to declare the area a reserve will gain momentum.  At present, lions are distributed in Gir National Park and Pania sanctuary and at least 15 different satellite locations which lions have made their permanent home. 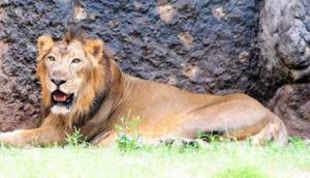 Sources in the forest department said the lion population has grown considerably in Amreli district, including Liliya, Kakraj, Khambha, Mitiyala and Savarkundla talukas.

Posted by Kishore Kotecha at 7:36 PM