he recent deaths of 23 lions within just 20 days has renewed the debate on translocation of lions to Madhya Pradesh's Kuno Palpur.

The process has been in limbo despite an SC ruling. While the SC order had seen almost unanimous opposition among conservationists in Gujarat, the recent incidents have left many wondering whether translocation is a good idea.

Pravinbhai Gohil, a teacher involved in creating environment awareness and conservation, said that it's an option whose merits need to be considered. "We were lucky that the present deaths were contained to a limited area. What if it happens on a larger scale?" asked Gohil.

He said a virus that can wipe out 23 lions can wipe out more too. But he warns that any translocation should be done after taking into consideration all the merits and demerits.

"We need to think about the good of the species. It's about conserving them. There is a need to create a better gene pool and there have been earlier instances of an entire population being wiped out," added Gohil.

However, not everyone agrees.

"Sending the lions to MP would be knee-jerk reaction. Our main objection is not about sharing lions with MP but with the site chosen for translocation. It is a tiger corridor and could give rise to lion-tiger conflict," said Priyavrat Gadhvi, member of the state wildlife board.

He said lion deaths are a matter of concern and proactive measures need to be taken to contain the outbreak.

"The department is already isolating the lions and observing them closely. The pro-translocation experts' argument, that the lions live in close quarters, are also not true because they are spread across 20,000 sq km. Also, the distance between two lion populations is, in many instances, greater than the average distance between tiger populations," he added. 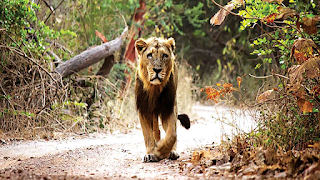 Posted by Kishore Kotecha at 3:59 PM