The death of 23 Asiatic lions in their only abode in Gujarat's Gir national park since September 20, some because of the canine distemper virus (CDV), has reignited the debate over finding them a second home.

Experts say the paucity of big animals inside the park's wildlife area for the lions to prey on, their increasing dependence on domestic cattle and congestion are some reasons for the spread of CDV. The Gujarat government has confirmed that four of the lions died of CDV, whose carriers are normally feral dogs.

Test reports of the remaining dead lions are awaited.

In the past, the Gujarat government has denied the presence of CDV but the deaths of four lions from Junagarh's Sakkarbaug Zoo, sent to Etawah's lion safari, were attributed to canine distemper. Anish Andheria, president of the Wildlife Conservation Trust, said many lions in Gir killed domestic cattle for prey as there weren't enough big animals like bulls in the wild.

"A lion does not eat the entire prey at one go. In between, the dogs consume the kill and infect it with the CDV. Once the lion returns to finish it off, its gets the deadly disease. And it spreads among the pride," he said.

The reason given by Andheria seems plausible as all the 23 animals who died were part of one pride of 26 lions. The remaining three have been isolated and are in Jamwada care centre, said Gujarat forest minister Ganpat Vasava. The CDV is more dangerous for lions than tigers. This is because lions move together in large numbers, making them more vulnerable to the virus as compared to tigers that are more isolated and territorial animals. "You will never hear that so many tigers have died of CDV," Andheria said.

Delhi-based biologist Fayaz Khudsar, who filed a petition in the Supreme Court seeking translocation of the lions to Kuno Palpur in Madhya Pradesh, said 184 lions died in Gir in the last two years, most in and around the 100 villages on Gir's boundary.

"The data clearly shows that lions were coming out of Gir looking for domestic cattle as prey as they are easy to hunt," he said.

Both Andheria and Khudsar also blamed increasing congestion in the three divisions of Gir for the deaths, saying the weaker prides were being pushed out of the 1,400 sq km core habitat to the periphery, which has a comparatively smaller prey population. The lion population is spread over 22,000 sq km across five districts in Gujarat.

According to the Gujarat forest department's 2015 census, one-third of the 523 lions in the region were living outside the core, making them susceptible to viruses. This is because the lion count has almost doubled since 1990, when it was 284. The latest initial estimates put the count at over 600 lions. While experts are unanimous that lions from Gir should be translocated, there are differing views on Kuno Palpur being the alternative habitat, as recommended by the Supreme Court in April 2013.

Ravi Chellam, a wildlife biologist on whose report the SC recommended the translocation, said Kuno Palpur was ready to take in the animals. "In April 2013, the Supreme Court directed the Government of India and the state governments of Gujarat and Madhya Pradesh to translocate lions from Gir to Kuno Palpur within six months...," said Chellam. "(but) Gujarat has largely been adopting delaying tactics and there is no sign of the lions being translocated," Chellam said.

H S Singh, member of the National Board for Wildlife, said Kuno Palpur was not suitable for lions because of high temperatures and the presence of tigers.

On Thursday, the Gujarat government announced that two safari parks would be set up – one near Ahmedabad and another in Narmada district, close to the Statue of Unity – to accommodate the growing number of Gir lions in the state. 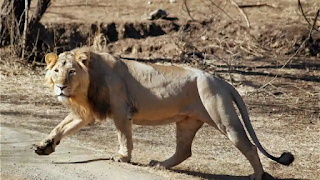 Posted by Kishore Kotecha at 5:05 PM