Did The Failure To Set Up A 'Second Home' For In Madhya Pradesh Cause Lion Deaths In Gir?

Did The Failure To Set Up A 'Second Home' For In Madhya Pradesh Cause Lion Deaths In Gir?

Five years ago, the Supreme Court had ordered the shifting of some lions from Gujarat to Madhya Pradesh, where a second home was to be set so that the species is saved from extinction, due to catastrophes like epidemic etc.

But, the order dated April 15, 2013, never got implemented as Gujarat government refused to transfer 40 lions to the Palpur Kuno Wildlife Sanctuary in MP citing various reasons.

The order gains significance in the wake of the recent mass deaths of lions in Gujarat where 23 big cats have died at Gir Sanctuary since September 12. According to reports, some of the deaths were caused by canine distemper virus (CDV).

The virus, which can spread from dogs in the wild, killed around 1,000 lions in Tanzania's Serengeti National Park.

With nearly one-third of them living outside the core, which makes them susceptible to viruses relocating at least some of the lion population becomes crucial for the species.

Following the recent lion deaths, Gujarat government has announced the setting up of two safari parks, one in Ahmedabad and in Narmada district to accommodate the growing population of big cats.

"One such park would come up near the Sardar Vallabhbhai Patel's upcoming 'Statue of Unity' near Rajpipla town of Narmada district and another one near Ahmedabad," Minister of State for Forest Raman Patkar said at Vapi in Valsad district.

In addition, people residing near Barda mountain in the eastern side of the Gir Sanctuary will be relocated elsewhere in a bid to provide a permanent habitat to lions, said the minister.

Meanwhile, in Madhya Pradesh, some locals staged a protest at Sheopur, demanding that some of the lions be shifted to Palpur-Kuno.

"In the last ten years, 100 crores spent to develop Kuno-Palpur as a second home for Asiatic lions. 25 villages were rehabilitated, affecting 10,000 families. But the Gujarat government has not given a single lion to Kuno- Palpur sanctuary," Mr Chouhan told PTI.

"The Vijay's Rupani government had admitted (in Gujarat Assembly) that in the last two years 184 lions died in Gir due to infighting, contagious infections, floods and railway accidents, among other reasons," Chouhan added. 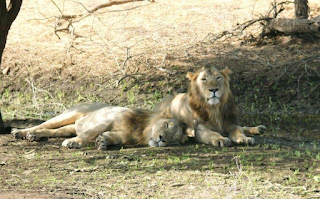 Posted by Kishore Kotecha at 4:53 PM