IN A HUGE relief to the state Forest Department, samples of two Asiatic lion cubs, which had died early this month, tested negative for the feared canine distemper virus even as forest teams completed scanning exercise in 1,740 square kilometres of forest and non-forested areas in Gir looking for any sick lion, which may be in need of medical treatment, on Wednesday.

Principal Chief Conservator of Forest G K Sinha, who also heads the forest force, on Wednesday said laboratory tests have confirmed that two of the six lion cubs which had died early this week did no did due to canine distemper virus (CDV) infection.

"Samples drawn from two lion cubs were tested at a veterinary college in Junagadh by deploying molecular virology method. Test reports have come negative for canine distemper (virus)," the PCCF said in an official release.

Forest officers said that negative results for CDV was a "huge relief".

CDV can infect lions and a host of other animals. A CDV outbreak in Tanzania in Africa had caused deaths of hundreds of lions in 1990s. Alarm bells had started ringing on September 20 when it came to light that 11 lions had died the previous week in Sarasiya Vidi area in Dalkhaniya range of Gir (east) forest.

Six cubs, three lionesses and two male lions were among those which had died within the short span of time. However, forest officers had said that the deaths were prima facie a result of a fight between male lions over control of its territory.

The PCCF had said that six of the three cubs had died due to injuries sustained in the infighting while the rest had died due to some infection. Veterinarians had drawn samples of blood and serum of the cubs, which had died due to suspected illness, and sent to the Junagadh lab. Some samples have also been sent to National Institute of Virology in Pune.

After the 11 deaths from a small patch of Gir forest, the Forest Department had launched an extensive scanning drive on Sunday to locate sick lions and give them medical treatment, if required. The department had formed teams of foresters, forester guards and lion trackers to scour all the 16 ranges in which the lion habitat has been divided and scan each and every lion. During the exercise, teams spotted two lionesses and a cub which died later on, taking the number of deaths in Sarasiya Vidi to 14 in two weeks. While two deaths were reported on Monday, one lioness reportedly died on Tuesday.

Meanwhile, the PCCF said that the teams had already scanned 1,740 square kilometres (sqkm) of lion habitat by Tuesday. "This includes 1,045 sqkm of Gir protected area and 695 area outside of Gir protected area. During the exercise, 460 lions have been spotted and out of them, only seven were found to have minor injuries. The remaining 453 were found to be in good health," Sinha said.

Among the areas, which has been scanned by 164 teams include Gir National Park and Sanctuary divided in Gir (east) and Gir (west) divisions and adjacent areas.

The lion census of 2015 had pegged the population of the big cats in Gir at 523.

Sinha said that two lions found with minor injuries in Gir National Park and Sanctuary and adjoining areas during the exercise were given treatment on the spot. The release stated that one lion with minor injuries and found in Bhavnagar had been shifted to a rescue centre for its medical treatment.

Officers said that the scouring of remaining forest area will continue until the entire lion landscape is covered and each and every lion has been scanned. 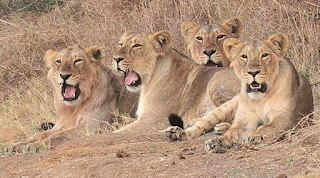 Posted by Kishore Kotecha at 7:12 PM