Kuno Palpur Sanctuary area to be extended by 413 sq km

Kuno Palpur Sanctuary area to be extended by 413 sq km

The Hitavada – The People's Paper

This will not only increase the area of Kuno Palpur Sanctuary but will also make it fit to stake claim for national park status as well. Moreover, if its area is increased then it will be also fulfilling the condition of Gujarat government for translocation of its world famous Asiatic Lions.

After extension of its area, Kuno Palpur Sanctuary, which has been developed for translocation of Asiatic Lion, will spread over 1,288 sq km of area. There is proposal to de-notify the 202 sq km area of Karera Wildlife Sanctuary under district Shivpuri and 80 sq km of area of Ghatigaon Sonchidiya Sanctuary under Gwalior.

After de notification of both areas, Government would add them into Kuno Palpur Sanctuary.

"We proposed Government to extend the area of Kuno Palpur Wildlife Sanctuary by another 413 sq km and also provide it status of National Park. Sanctuary has been developed for translocation of Asiatic lion project which is pending from over the years," said Alok Kumar, Additional Principal Chief Conservator of Forest (APCCF).

Talking to 'The Hitavada, he said the biggest condition set by Gujarat government was to extend the area of Kuno Palpur sanctuary for translocation of Asiatic Lions and if the area of sanctuary is increased by another 413 sq km then automatically, Gujarat demand would get fulfilled. At present, Kuno Palpur Sanctuary is spread over 345 sq km of area and now proposal has been come up to add another 413 sq km area into it. If sanctuary gets national park status then this 413 km of area will be developed as core area and 530 sq km of additional area will be buffer zone. He said that at present Asiatic lion is only in Gir National Park of Gujarat. In year 1991, proposal came up to translocate few Asiatic Lion in Madhya Pradesh to save the endangered species from extinction.

He said after getting final nod in Cabinet meeting, proposal will be sent to the Central Forest, Environment and Climate Change Ministry. The proposal will also be presented before National Wildlife Board for final nod. 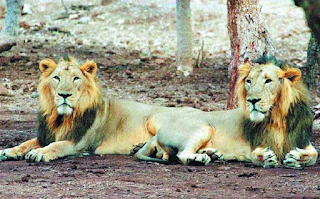 Posted by Kishore Kotecha at 12:33 AM