Instead of leaving the park and its animals open to challenges, it's best to look for new homes for the Asiatic Lions. Historically speaking, lions were found in what is modern day Haryana, Delhi and Madhya Pradesh. These areas could be ideal for another Gir-type park.

The Wildlife Week celebrations began across the country on Monday. In the same week, it has emerged that within a month, 23 Asiatic lions (at the time of going to press) have died at Gujarat's Gir Forest National Park, which is home to all the world's remaining 525 Asiastic lions. When the first deaths were reported between September 10 and 21, forest officials said it was because of "infighting" (competition for territorial supremacy) between the prides. Since then, another 10 have perished. Now, there is speculation that there is evidence of a "viral infection" in some blood and tissue samples. Some reports have even said canine distemper virus (CDV) has been found in four samples.

Experts say the Gir lions have always been susceptible to a variety of viruses because they share territory with the tribal herdsmen community called Maldharis, their cattle and other domestic animals such as dogs. These deaths, they say, could have been avoided if a long-term epidemiological communicable disease study had been put in place at least 10 years ago to understand the disease load of the different prides. Moreover, animals don't die because of just a virus attack but because of low immunity. There is high chance that lions in Gir have low immunity because of inter-breeding that has been taking place for centuries.

The deaths of lions have also reignited a debate that started in 1993 over the relocation of lions. At a workshop in Vadodara on the issue that year, it was decided that a few prides of lions would be shifted to other park(s) in the country that are geographically and historically suitable for the animals. This could take care of two requirements: ensure enough territory and prey base for prides of lions; and expand their genetic pool. The first for food, and the second to avoid a "genetic bottleneck," which makes the immune systems of animals weak. The Kuno Wildlife Sanctuary was chosen for relocation of prides.

However, the other view is that the virus attack and the deaths of lions and relocation are two different things because all populations of lions have to be taken care of. Moreover, Kuno may be ready with its prey base but the lions of Gir are more used to large, easily available animals such as cattle than other fast-moving wild animals, and that unlike Maldharis, who are economically stronger (and so can absorb losses), the poor population around Kuno may not take to cattle killing very kindly. 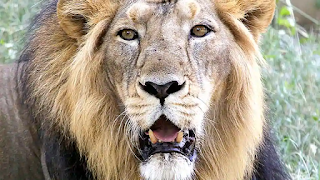 Posted by Kishore Kotecha at 6:29 PM