Gujarat government mulls radio-collaring of every lion in Gir sanctuary

Gujarat government mulls radio-collaring of every lion in Gir sanctuary

AHMEDABAD: Alarmed by the deaths of 32 lions in and around Gir wildlife sanctuary due to "unnatural causes" in the last two years, the Gujarat government is now considering to fit radio collars on every lion to track their movements.

Talking to PTI, Minister of State for Forests and Environment Ramanlal Patkar today said that the issue of using radio collars on each lion was discussed during a meeting held yesterday.

"The issue of placing radio collars on each lion (in the sanctuary) is under consideration and a decision to this effect will be taken soon," he said.

Besides, for the protection of these felines, the government is also taking some other measures, like cracking down on unauthorised agents who organise illegal lion shows and people trying to take selfies with the animals.

The government is also trying to create a network of informers.

He said for better co-ordination of security-related issues, the Gir forest, which is spread over the area of 109 square kms covering three different districts, will now be brought under the jurisdiction of Junagadh forest authorities.

"Lions are also found residing outside the forest area, and therefore a special division will be created under Chief Conservator of Forest Junagadh (at Amreli district).

That division will look after areas such as Lilya, Kukawav, Jafrabad and Rajula of Amreli district and Mahua, Jesar, Palitana and Talaja of Bhavnagar district," he said.

"With the increased flow of tourists at Gir we have come to know that some people are organising illegal lion shows for tourists.

Incidents of harassment of lions or being chased on vehicles have also come to our notice," Vasava said.

"Now, those found indulging in any such activities will be charged under section 9 of the Wildlife Protection Act, 1972, which has a provision of imprisonment of up to seven years," he said.

A network of informers will be created to find out about people indulging in such act, he said.

The government has also decided to increase facilities for tourists by creating new tourists zones like Chikhalkuba and areas near Girnar mountain.

Earlier, tourists were only allowed to enter Sasan Gir and Devalia forest areas to see lions.

"Also, the state government has decided to allow more number of visitors and vehicles in the forest areas now," Vasava said.

Recently, the Gujarat high court had also taken suo motu cognisance of the number of lion deaths in Gir and sought the government's explanation.

As per the figures, as many as 184 lions- with 32 due to 'unnatural causes'- had died in two years- 2016 and 2017 and the high court had issued notices to the state and central governments over the issue.

As per the 2015 census, there were 523 lions in the state, the only abode of Asiatic lions.

The government had told the state Assembly that there are four reasons behind the "unnatural" death of lions-- road accidents, railway tracks passing through the forest areas, wells with damaged or no parapets and electric fences around agricultural lands. 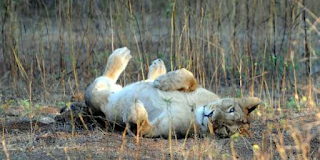 Posted by Kishore Kotecha at 4:39 PM