The endangered Asiatic lion, which only live in Gir Forest National Park of India, has made a comeback from the brink of extinction, with its population rising to more than 600.

In the late 1960s, there were only about 180 Asiatic lions, but the progress in their numbers provoked wildlife conservationists to consider them as endangered.

• Asiatic lion are cousins of the African lion. It is believed that both got separated 100000 years ago.

• Asiatic lions are slightly smaller and have a distinctive fold of skin along their bellies.

• Asiatic lion once inhabited complete southwest Asia, but, in past few years, it got restricted to the 1400 square kilometre Gir Sanctuary in Gujarat state, leading to its listing as critically endangered in the year 2000.

• The species' population was under threat due to hunting and human encroachment.

• A recent survey revealed increase in the number of Asiatic lions, Gir forest now inhabits more than 600 lions, up from 523 in a 2015 census.

• They are a major tourist attraction in Gujarat. Earlier, they were only regarded as the target of poachers.

• This increase in the number of lions is attributed to the wildlife conservation schemes, well-trained staff and vets as well as help from farmers.

• It's population is currently growing at about two per cent a year.

After considering the extinction and then the unexpected rise in the number of lions, wildlife conservationists have suggested relocating some of the lions to another sanctuary.

Conservationists believe that their relocation will reduce human-animal conflict and will avoid the risk of the Asiatic lion being wiped out by disease or a natural disaster. 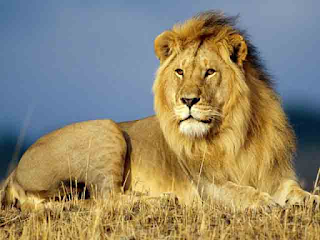 Posted by Kishore Kotecha at 1:07 PM