Gandhinagar: In its report on 'economic sector' of 2018, the Comptroller and Auditor General (CAG) has pointed out that the government has failed to sanction any new protected habitats for Asiatic lions in Gujarat since 2008.

"In view of the rising population and high instances of deaths of lions outside the Gir Protected Area during 2012-13 to 2016-17, the creation of new protected areas was one of the available options with the forest department," said the report.

Pointing out that a miraculous 54.6 per cent jump in the population of these leonine creatures between 2011 and 2015 is "exerting pressure" on the existing secured habitat, the CAG said that wildlife conservation efforts have in the past yielded good results for the species, however, the sanctioning of no new protected areas in the past decade can severely affect the bettering population of Asiatic lions.

While records suggest that the population of these majestic creatures increased from 308 in 2011 to 356 in 2015, multiple deaths within the species have been recorded in the same time frame with 106 being attributed to natural and 21 being attributed to unnatural causes of death.

"The proposal submitted (March 2016) for draft Eco Sensitive Zone notification for Gir Protected Area also reports that the latest census should be taken as a sign of warning as nearly one-third (32 per cent) of lions have their habitat outside the Gir Protected Area, risking human lives, livestock as well as the safety of the lions themselves," added the report.

CAG, in its report, also stated that the government has been reducing the proposed land for the protected area from 30,152.32 hectares to a mere 4,811.51 hectares.

Underlining the delays on the part of the ruling dispensation in transferring government wasteland in favour of the Forest and environment department, CAG also highlighted the need to implement a 2015 proposal that advised the creation of a safe corridor for lions moving out of the Gir protected areas.

Earlier this week, the Gujarat High Court on Monday sent notices to the state and Central government seeking an explanation concerning the deaths of 184 lions in the state in the last two years.

A total area spanning 17,099.93 square kilometres comprising of 28 protected areas that include wildlife sanctuaries, national parks and conservation reserves currently exists in Gujarat. Out of the total area, only 4,640.58 square kilometres is forest land while the remaining comprises of non-forest ecosystems. 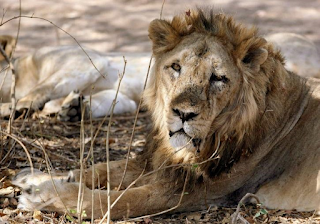 Posted by Kishore Kotecha at 3:26 PM