A staggering 184 Asiatic Lions, an endangered species found only in Gujarat, died in the last two years, information provided by the state government in the assembly showed.

In response to a question about the steps taken to prevent unnatural lion deaths, the minister said in the written reply that parapet walls have been built around open wells near Gir sanctuary, while fencing has been done on both sides of the Surendranagar-Pipavav railway track.

"Wildlife Mitras have been appointed in villages surrounding Gir. Speed breakers have been installed on public roads in the sanctuary area, and various awareness programmes are being undertaken for protection of lions," the reply said.

The 2015 Census estimated the number of Asiatic Lions in Gujarat, which are concentrated mostly in Junagadh, Gir Somnath, Bhavnagar and Amreli districts of Saurashtra, at 523. The number of the Wildcats rose to 650 in another study conducted in 2017.

For the past several years, Gujarat is locked in a long battle with neighbouring Madhya Pradesh for translocation of some Asiatic Lions to Kuno Palpur sanctuary. Experts have recommended that some lions be shifted to Kuno Palpur to mitigate risk to the endangered species from potential epidemics. An expert committee has recommended Kuno Palpur as the ideal second home for the Asiatic Lions, but the Gujarat government is reluctant to share its pride with the other state and is insisting on more studies to be conducted before some of the lions are shifted.

Twelve lions, lionesses and cubs died due to unnatural causes in 2016, while the number rose to 20 in 2017. Causes for unnatural deaths were not specified 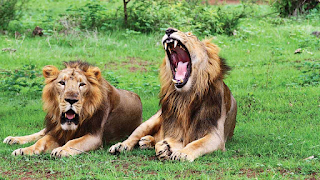 Posted by Kishore Kotecha at 12:43 PM