The lionhearted women of Gir 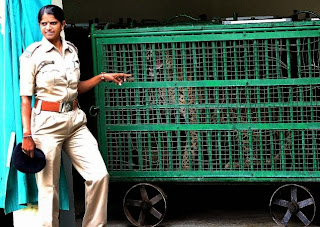 11-08-2014
The lionhearted women of Gir
The Hindu
http://www.thehindu.com/news/national/other-states/the-lionhearted-women-of-gir/article6305295.ece

These forest guards have beaten the odds, in the wild and in society

It happened during a hot chase. In the wilderness of Gir, a leopard in pursuit of a jungle cat fell into a well. All efforts to pull it up were in vain. It was time for the last resort — the tranquilliser shot. It meant going down the well in a cage and getting close enough to fire a tranquilliser dart at the predator.

"The leopard chewed up the rope we suspended into the 40-feet-deep well. It was the first time I went down a well," says Ms. Vadher, forester from Bhandori village in Junagadh district.

In her six years of service at the Sasan Gir national park — home to the Asiatic lion — she has rescued about 800 animals, including lions, leopards and pythons, that lay injured in wells and ditches, or strayed into human habitation.

"Initially, I was afraid, but now I don't know what fear is. Male officials thought women could be of little service in forests. We were not assigned hard work. After six months of office work, I wanted to do something important. At that time, there were no women in animal rescue operations," she recalls.

Ms. Vadher's first test came when a lioness was found injured by a porcupine quill. With the wound festering, the animal had not been able to hunt and had become weak.

"We kept a trap cage with a goat, but the lioness did not enter. Adding to our worries, two other lionesses arrived on the scene with their cubs. It was a long wait of 12 hours. I told myself that if I left I would never again get rescue work. So I stuck with the team. By the time we got the injured lioness into the cage it was 5 a.m. the next day," she recalls.

Ms. Vadher is part of a team of 44 women foresters and guards engaged in a range of wildlife and forest conservation, who were first recruited at Gir in 2007, when then Chief Minister Narendra Modi carved out a 33 per cent quota for women.

Never did she think that she would win awards, including one from Mr. Modi. "She has more award money than her annual salary of Rs. 60,000," says Sandeep Kumar, Deputy Conservator at Gir. "At first, these women were full of doubts. Now they excel in every area. Now lakhs of women apply."

The women have had to tackle more than the fear of the wild. Societal pressures about staying away from home and working with male colleagues remain unconquered battles. For instance, when forester Tripti Joshi got married, her in-laws objected to her work. "They wanted me to quit, but my father maintained that I would continue working," she says.

The entry of women guards added a new dimension to human-animal conflict management. It's the people, they say, who are more difficult than the wild beasts. Even so, the neighbouring villages of Gir regard these women in uniform with respect. Unlike some of their male counterparts, these women control restive crowds of onlookers without creating feelings of acrimony.

"No two rescue operations are same. The ground situation, the public mood is different," says Ms. Vadher. From not knowing what a forest really looked like to saving ferocious felines from its depths, she has come a long way. A prominent scar on her right wrist, which she received after being injured by a leopard on which she was trying to fit a micro chip on, takes the pride of place. She received 15 stitches for it. "When my mother saw the scar, it was the first time she learnt about the nature of my work," she says.

Posted by Kishore Kotecha at 4:52 PM