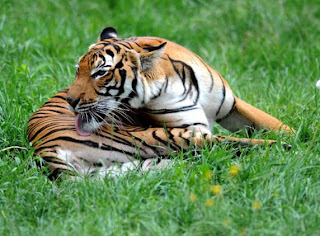 The big cats in India are highly fertile but their low population in the wild makes it difficult for them to find a mate for breeding.

The fast dwindling numbers are not due to fertility or inbreeding problems, but related to the loss of the habitat.

According to city researchers, the ratio between male and female tigers and other big cats is roughly 3:7. For breeding to take place, the animals should meet one another and during the encounter, the female animal should be in heat or ovulation. The loss of habitat and consequent fall in the number of big cats has made such encounters difficult, and thus there's no remarkable increase in their population.

The CCMB scientists, who conducted research on Asiatic lions and Indian tigers, found that "a majority of the animals exhibited good spermatozoa number, high percentage of motile spermatozoa and low incidence of abnormal spermatozoa". They also found that there is no "inbreeding depression" as yet in the big cats.

"The high fertilising ability of the semen samples and the high levels of serum testosterone further support the view that the Asiatic lions and Indian tigers are not completely inbred," a study by the CCMB team revealed.

In the case of the Gir forests, where lions are in sufficient number, the population growth rate is relatively higher. But in tiger reserves like Nagarjunasagar, which are spread over a vast expanse of area in Guntur, Nalgonda, Mahbubnagar, Prakasam and Kurnool districts, big cats do not often meet and this explains why more cubs are not born.

Posted by Kishore Kotecha at 3:01 PM