NEW DELHI: A committee of the Ministry of Environment and Forests has given a go-ahead for limestone mining by a private company near Gir Wildlife Sanctuary, the only abode of the Asiatic Lion in the world.

The 417 hectares of land where mining has been allowed, is located 6.25 km from the sanctuary. The project has been allowed even though the Gujarat High Court has put a stay on final notification of eco-sensitive zone (ESZ) of Gir Protected Area.

The Standing Committee of the National Board for Wildlife, in its meeting on March 27, recommended the proposal for mining over a 417.35 hectare area at Sugala and Jagatiya villages falling outside the lion sanctuary "along with the conditions and the wildlife mitigation measures stipulated by the State Chief Wildlife Warden".

The Ministry issued guidelines to restrict damaged caused due to developmental activities around wildlife sanctuaries and national parks. In general, the ESZ width is up to 10 km but states have been asked to demarcate ESZ around all wildlife protected areas. The panel has asked the user agency to ensure construction material is not dumped and polluted water does not enter the sanctuary, to put up a plan to develop forest after completion of mining, and to have a wildlife conservation plan in place.

The National Board for Wildlife, in the minutes of the meeting, a copy of which is with TNIE, mentioned that the High Court, while hearing a PIL in 2017, issued a stay order on final notification of eco-sensitive zone of Gir Protected Area. The PIL was about the Gujarat government submitting a proposal to the Centre for reducing the eco-sensitive zone from 3.33 lakh hectare area comprising 291 villages surrounding Gir to 1.14 lakh hectares consisting of 191 villages. The Sugala and Jagatiya villages were a part of the ESZ as per earlier demarcated area, but were removed in the new proposal by the state.

As per the 2017 Census, there are 650 Asiatic lions in Gir and nearly one-fourth of them live outside core habitat. There were several reports of threat posed to them by illegal mining. Environment lawyer Ritwick Dutta, who is also handling the case related to translocation of lions in the NGT, said the approval will pose a threat to their existence.

"It is very surprising that the standing committee recommended the proposal without even conducting a field visit or assessment of the impact of mining on 417 hectares of land, which is a significant area falling within 10 km of eco-sensitive zone," said the lawyer. "The conditions say the user agency shall not harm or destroy wildlife habitat, including fauna and flora. How will a mining project in an area like this not harm environment? The Ministry didn't even bother to conduct a site inspection." 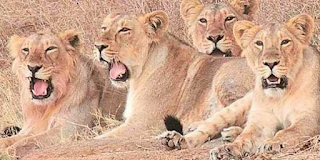 Posted by Kishore Kotecha at 1:44 PM