The Gujarat Police have arrested one of the four miscreants who chased lions, lionesses and cubs through the Gir sanctuary, as seen in a video that went viral on Wednesday. The police tracked down the accused near Rajkot on Thursday through the licence plate number and with help from villagers, NDTV reported .

In the video, the frightened animals can be seen running away from the bike-borne intruders. Forest officials said they are on track to find the three others from the clip. Wildlife authorities are trying to trace the source of the video. It is not known yet when it was taken.

The 1,400-sq-km expanse of the Gir sanctuary in West Gujarat is the only natural habitat of Asiatic lions, which were once found in much of the continent. Today, the 400 lions that live there deal with increasing human proximity because of developments such as roads through the forest, expanding villages and illegal mining. 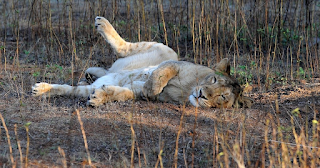 Posted by Kishore Kotecha at 7:18 PM