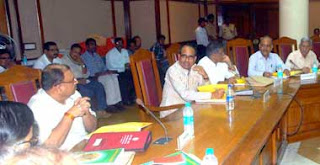 Chief Minister Shri Shivraj Singh Chouhan has directed to remove all hurdles in bringing lions from Gujarat to Kuno-Palanpur sanctuary so that work to rehabilitate lions in Madhya Pradesh can be started at the earliest. He directed to pay special attention to protection of vulture, Barahsingha and Son Chidiya for their survival. CM Shri Chouhan chaired 11th meeting of Madhya Pradesh State Wildlife Board here today.

The Chief Minister congratulated Kanha and Satpura tiger reserves for receiving awards from India Bio-diversity. Describing experiment of increasing number of tigers in Panna national park as unique, he lauded staff of Forest Department and project.
The Chief Minister directed to undertake large-scale publicity of harmful effects of painkilling medicine diclofenac on vultures and other birds. He said that publicity campaign in this connection should be taken up jointly by Forest, Animal Husbandry and Panchayats Departments.
The Chief Minister directed to seek consent of re-settled families in the work of shifting of villages from tiger reserves in the state. He instructed to provide compensation from available funds of Compensatory Afforestation Fund Management and Regulation Authoriety (CAMPA). Lauding the vulture breeding centre at Kerwa in Bhopal by Government of India and Bombay Natural History Society, the Chief Minister said that it is must to save vultures for environment.
The Chief Minister made a special appeal to wildlife experts to chalk out scheme for management of increased population of Neelgai following reports about damage of crops by them in such a way that Neelgais remain safe and farmers' crops are also not damaged. The Chief Minister directed to chalk out a proposal for captive breeding of Son Chidiya as per wildlife experts' advice in Kuno-Palpur sanctuary.
The meeting discussed proposals for permission for development works within 10 kilometer radius of national parks and sanctuaries. The meeting decided to seek permission for setting up coal-based thermal power plant and construction of steel silo within 10 kilometer radius of Ratapani sanctuary from National Wildlife Board. It was decided to send proposal regarding laying of 765 KV single circuit transmission line within 10 kilometer radius of Singhori sanctuary.
Proposals were also discussed regarding laying of third rail line between Habibganj and Barkhera in Ratapani sanctuary, renovation of canal within limits of Singhori sanctuary, upgradation of Amdoh to Surai Dhaba road in Ratapani sanctuary, survey and upgradation of Balakot-Chirai-Manka road in Naurodehi sanctuary (Damoh), road construction from Dada Khirak to Tighara in Son Chidiya sanctuary in Ghatigaon (Gwalior), construction of approach roads under Mukhyamantri Gram Sadak Yojana, Beldara Talab minor irrigation project in Bagdara wildlife sanctuary in Singrauli, laying of additional Katni-Singrauli rail line in Sanjay Dubri sanctuary under Sanjay tiger reserve and laying underground sewer line in Madhya national park (Shivpuri).
Dhoopgarh, Mahadev, Chauragarh, Bada Mahadev and Nagdwari are major religious places in Pachmarhi under Satpura tiger reserve where fairs are held on Shivratri and Nagpanchami with participation of 15 to 20 lakh devotees. In view of devotees' convenience, the Chief Minister directed to send a proposal to National Wildlife Board to unreserve these areas for construction of public facilities. Forest Minister Dr. Gaurishankar Shejwar, Chief Secretary Shri Anthony de Sa, Prinicpal Secretary Forests Shri B.P. Singh, members of Wildlife Board and senior officers of concerning departments were present on the occasion. -
Posted by Kishore Kotecha at 11:46 PM