In search of those amber eyes 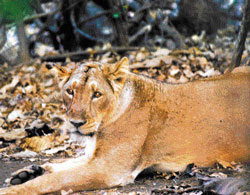 We went in quest of lions. Very special lions — the rare Asiatic breed, which once roamed the whole of West Asia from Northern Turkey through Arabia to northern India up to the Narmada.

But the dedicated 'sportsmen' of the Raj reduced them to just 12 by the end of the 19th century. Then, the Nawab of Junagadh called a halt. Today, 411 Asiatic lions roam free in 1,412 sq km of protected wilderness in Gujarat's Gir. And because they are protected, a whole ecosystem is alive and thriving.

This year, when spring was warming into summer, we drove into the green campus of the Gujarat Forest Department's Sinh Sadan. The accommodation was no-frills comfortable; the meals in the dining hall were vegetarian and sustaining; and because many visitors had flocked into the hamlet of Sasan Gir, we had to take the second round that morning, missing our favoured dawn tour.

Lions prefer hunting at night, settling down to sleep when the sun begins to rise. So though we didn't expect to sight a lion on that forenoon safari, we drove around anyway. We're glad we did. The other jeeps had returned to Sinh Sadan and apart from the forest workers and a few Maldhari herdsmen, who have some encampments called nesses in the forest, we had the thorn-scrub jungle to ourselves.

This is the right season for wildlife spotting. Most trees have shed their leaves and forest workers were sweeping them up and burning them to prevent forest fires. Consequently, visibility is clear for fairly long distances. We realised, once again, that when an animal at the top of the food chain is protected, then everything lower down also thrives. There were herds of chital, their speckled coats flickering through the sun-dappled forest, drinking at the water troughs set up and filled by the Forest Department.

Clans of langurs had teamed up with the spotted deer, dropping leaves and fruit to the chital grazing on the forest floor. From their high viewpoint atop trees, they would also spot predators approaching from far away. Their hooting warning would alert the deer to flee, flashing the white on their tails as danger signals to other animals. This late in the morning, however, most of the predators were asleep and even peacocks, with their beautiful and ungainly tails pecked at their breakfast with the deliberate fastidiousness of gourmets.

This is the best time to do bird-watching and though most of Gir's forests had the usual assortment of doves, woodpeckers and garrulous babblers, we did see a spotted owlet, fluffed up like a sage in a downy coat, a brace of fat partridges, who seemed as curious about us as we were about them, and a brilliantly painted kingfisher. He glittered in a spring-green valley, perched on a branch above a chortling jungle stream. If it hadn't been for the lions, the trees would probably have been cut for firewood, the stream would have dried and the birds would have found their way to greener pastures.

But we still hadn't seen any lions though. When we returned to Sinh Sadan, a family from Mumbai were as bubbly as champagne. They had seen and photographed a whole pride of lions — a full-maned lion, two lionesses, and three cubs. "I wanted to get out of the jeep and cuddle them," gushed 10-year old Sania, "but their mother might have bitten me. No?" We agreed that it might have happened but that didn't dampen her enthusiasm one little bit!

The well-informed Dr Sandeep Kumar, IFS, deputy conservator of forests and boss of Gir, assured us that we would probably have better luck in the afternoon. He put us in the hands of guide Ketan, who was also a photographer, and driver Ashish. We were told that they were very lucky — in animal spotting, luck plays a major role. And it seemed to change immediately.

We passed a Maldhari herdsman grazing his buffaloes just outside a rather makeshift village. He said a lion had been seen not far from his settlement this morning and his herd of buffaloes was still restless. In spite of having their herds attacked by lions and leopards, many Maldharis prefer to claim their right as forest dwellers and stay on. They get paid for every one of their cattle killed by a jungle predator, but the natural fodder in the forest is so plentiful that it makes up for the danger.

If a lion had been seen in the morning the chances were that it had not wandered too far after dawn. We passed a nilgai bull standing stock-still against a huge, overshadowing banyan tree. It wasn't grazing but was as immobile a blue-grey boulder. We wondered, for a moment, if it had seen a big cat, but then it moved and began to nibble on some leaves. Clearly it had been wary of us and had frozen: normal bluebull strategy. A little later, we spotted nervous chinkara, leaping away like ballet dancers. But their nimble-footed performance could have been triggered by our presence. They needn't, necessarily, have sensed a predator approaching.

The sun was quite low in the sky, the light had softened, and we were giving up hope of ever spotting one of the lions of Gir when we heard the yap of a frightened spotted deer. Three of them were just off the road, a little ahead of us. We drove up and saw them standing rigid, their ears swivelled forward. Danger lay in front of them and they were ready to scoot.

We raced ahead. Ketan mentioned a wooded ravine as a likely spot. We drove into it. Stopped.

There, in the half-shadows of the forest floor, stretched out in regal ease, was a magnificent lioness. She turned her head and looked at us with serene arrogance, the sunlight glowing on her amber eyes. Then, when we had taken all the pictures we wanted, she rose, and very languidly vanished into the protected forests of Gir.
Posted by Kishore Kotecha at 10:25 AM