13 lions have been found dead in the forests of Gir in the last two weeks. A lioness and her cub died just this week. So far seven cubs, four females and two males have died.

By the end of the 19th century, the Asiatic lion was wiped out across its range in India except for a small population in the Gir forests of Gujarat. It might have ended here for the big cat as these forests were the hunting grounds of the Maharaja of Junagadh, but Lord Curzon alerted him to the fact that these were the last of the lions left in India and the Maharaja then decided to protect them instead of hanging them on his wall.

Since then, it has been a rocky back and forth for the lion with populations rising and waning until it steadied in the 1960s and has been growing since. Historic numbers say that the original population stood at about only 20 lions in the late 19th century to between 60-100 animals in the early 1900s and in 2015, the count in Gujarat stated that the numbers were at 523. With the recent deaths, the number has dropped to 513.

Foul play like poaching or poisoning has been ruled out by the Forest Department but disease seems to be a big question mark. The Forest Department has said that the main cause was infighting and that the injured lions went into hiding and then due to starvation, developed infections which finally killed them. This seems a far-fetched explanation. They claim that about 40 lion deaths a year is normal and that with the birth of 70 to 80 cubs, there is a steady 5% growth in the population every year. Some of the dead lions have been found with infections in their lungs and livers. Samples of all the dead animals have been sent to the Pune virology institute for examination.

64 teams have been created to examine all the lions in Gir to check if they are showing signs of illness. A disease can prove fatal to the population as these lions are quite heavily inbred. A study published in 2012 stated that the Gir lions were quite heavily inbred with low genetic diversity. This makes them susceptible to disease, keeps their reproductive rates low and death rates high.

Biologists and conservationists who have been studying Gir lions for decades have been saying that a portion of them should be moved away from Gujarat in order to ensure that all lions are not in one basket, so to speak, endangering their future. With all the lions in one area, it was understood that an infection or a disease could put a huge dent in the population if not wipe them out. This debate has been raging since the early 1990s. In 2013, the Supreme Court ordered the shifting of some lions to the Kuno Sanctuary in Madhya Pradesh. The Gujarat government has refused to do so in contravention of the Supreme Court order.

As Kuno in Madhya Pradesh has been waiting for the lions for nearly 20 years now (based on a plan formed by wildlife and government experts that was developed before the Supreme Court intervention), all the work in shifting out villagers in the area is coming under pressure and the state government has decided to turn Kuno into a tiger sanctuary instead. There are already a few tigers that use Kuno when they disperse from their other forests and there are already a few resident tigers in this area. This will totally inhibit the translocation of the lions now as lions and tigers will not mesh well together in the same space - they'll kill each other.

But it's important to remember that the lions of Gir have in any case stepped out of this region. Nearly half of them are found outside the Gir forests and have dispersed naturally across 20,000 sq kms of Gujarat using heavily-wooded areas and fragmented forests. Most of these animals survive on livestock and many die due to cars on highways, railway lines and some in conflict with people. Often these lions do make it to the borders of the state but get shunted back into Gujarat by the Forest Department. In Gujarat, people have historically learnt to live with lions and tolerate their cattle-lifting. The big cats might not find the same welcome everywhere else. The lions also, barring a few freak incidents, do not have a history of killing people. The government tries to pay out cattle compensation to prevent potential conflict.

It is possible that other dominant males looking to establish territory or a pride might have attacked and killed the first few lions and the cubs. Big cats are territorial and in dominance fights, the winner will kill the existing cubs to bring the females into heat and father his own cubs. Nature has designed things this way to ensure the survival of the best genes. But infighting can become frequent under other pressures like lack of space, lack of prey, skewed male-female ratios and other factors like frequent droughts and floods and other natural and man-made disasters that could put artificial stresses on the cats.

But lion fights are messy and injuries to their bodies would be immediately obvious. So it begs the question of why there are no definitive answers for the deaths when infighting is the main explanation given by the Forest Department. The department has admitted to the presence of an infection in the liver and lungs of some of the lions in their press release but have blamed that too on the infighting. 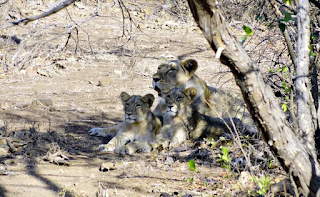 Posted by Kishore Kotecha at 1:16 PM